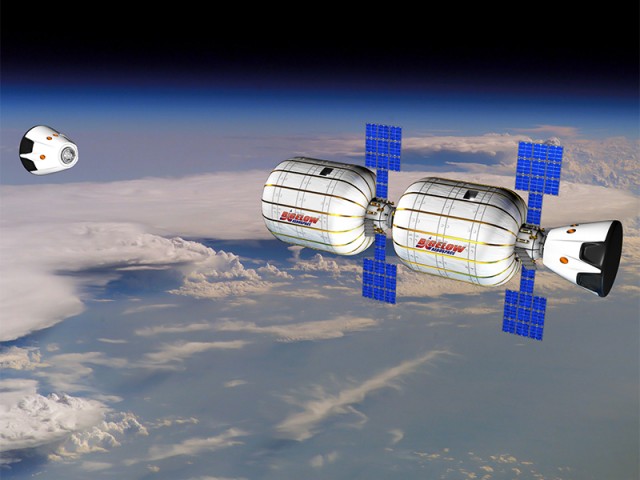 The announcement was made at a news conference at the U.S. Space Symposium in Colorado Springs, Colorado. The duo announced Monday that they intend to launch a 330-cubic meter inflatable space station, otherwise known as B330, aboard the ULA’s Atlas five rocket in the next four years.

Gizmodo reports that the B330 will be about 30% the size of the international space station (ISS). The creators behind the inflatable hotel claim it will “support zero-gravity research including scientific missions and manufacturing processes,” adding that it may have “potential as a destination for space tourism and a craft for missions destined for the Moon and Mars.”

Commenting on the partnership with ULA at the news conference, Bigelow said their joint collaboration is “a potentially enormously important relationship.”

Bigelow and the ULA plan to launch one of its two B330’s by 2020. One of these may tag behind the foot trails of the Bigelow Expandable Activity Module (BEAM), which made its way onto the ISS earlier this week. It will be inflated within 30 days and continue to function over the course of two years.

“We are exploring options for the location of the initial B330 including discussions with NASA on the possibility of attaching it to the International Space Station (ISS),” Bigelow said in a press statement.

“In that configuration, the B330 will enlarge the station’s volume by 30% and function as a multipurpose testbed in support of NASA’s exploration goals as well as provide significant commercial opportunities. The working name for this module is XBASE or Expandable Bigelow Advanced Station Enhancement,” he added.

“When looking for a vehicle to launch our large, unique spacecraft, ULA provides a heritage of solid mission success, schedule certainty and a cost effective solution,” he continued.

The ULA Atlas 5 Rocket is the only spacecraft that can carry such a heavy load into space. NASA’s commercial crew will aid transportation to the B330, regardless of whether the station is floating in space or latched to the ISS. The venture opens up new possibilities for the private sector and tourism in general.

The inflatable space habitats are comprised of various materials and fabric, which will shield the inflatable hotel from the impact of space debris. The space hotel is folded and latched to a rocket, and then unfolds and inflates in space. It is anticipated that the project will help NASA, among other space agencies, save millions of dollars.

“We could not be more pleased than to partner with Bigelow Aerospace and reserve a launch slot on our manifest for this revolutionary mission,” Tory Bruno, president of ULA, said in a press release.

“This innovative and game-changing advance will dramatically increase opportunities for space research in fields like materials, medicine and biology. And it enables destinations in space for countries, corporations and even individuals far beyond what is available today, effectively democratizing space. We can’t begin to imagine the future potential of affordable real estate in space,” he added.

The B330 is approximately 20 times larger than the BEAM and would increase the volume of the ISS by 30%. During the press conference, Bigelow said he hopes XBASE will increase their commercial traffic to the ISS, which would allow other researchers to occupy the facility on a “timeshare” basis with NASA, reports New Scientist.

“We would love to see Disney have a Disney space station,” Bigelow said. “Wouldn’t that be cool?”