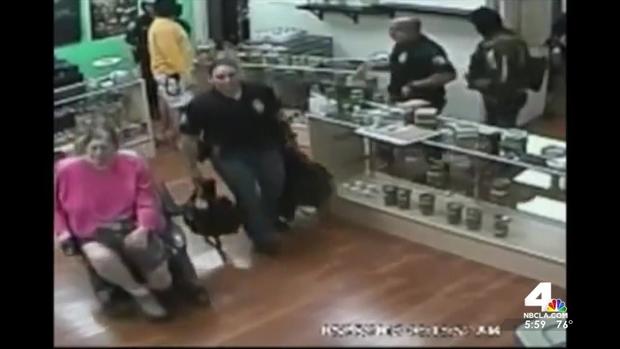 Three of the Santa Ana, California, police officers caught on camera eating what is believed to be marijuana edibles and mocking an amputee after raiding an Orange County medical marijuana dispensary have been charged with vandalism and petty theft. Meanwhile, the Santa Ana Police Department (SAPD) maintains that the officers were eating protein bars.

31-year-old Brandon Matthew Sontag, 37-year-old Nicole Lynn Quijas and 32-year-old Jorge Arroyo were the officers charged, according to a press release by the district attorney. Quijas and Arroyo were both charged with a misdemeanor count of vandalism, and could face six months in prison. Sontag, on the other hand, was charged with vandalism for using a crowbar to destroy a security camera, and faces a year and a half in prison.

First posted in June, the video reveals the officers breaking into the Sky High Holistic marijuana dispensary in Santa Ana. They then proceed to disable the security cameras, one of which was destroyed using a crowbar. Afterwards, the police can be seen passing around candy, which is suspected to have been laced with marijuana. When one officer asked, “what flavor is it?,” laughter follows. One of them can be seen playing darts in the background.

Female officer said she wanted to kick woman “in her nub”

In one part of the video, which the SAPD purports was heavily edited, a female officer said she wanted to kick an amputee woman “in her [expletive] nub.” The woman, Marla James, is a marijuana activist who was at the dispensary when the officers first arrived.

“David and I were observing in one of the collectives,” James told OC Weekly. “We were actually there to observe a raid. We knew the raid was going to happen. We were there to make sure that the employees did not offer resistance. We had trained them what to do, which was not to talk and do exactly what the police told them to do.”

James couldn’t get on the ground due to her amputated leg, so the officers asked her to put her hands in the air. She refused because of her rheumatoid arthritis, which apparently irritated the police officer. “You know what, I was really nice to that woman,” Jame said. “I even complimented her on her hair. I treated that woman with respect and I have no idea why she wanted to kick my stump,” she added.

One video reveals officers Brandon Matthew Sontag and Jorge Arroyo talking as the raid nears an end. One officer asks the other if he knows, “John Fish, the D.A.” When the other officer says he does know Fish, the other officer replies, “He’s the judge that signed our warrant. He’s the f***er that pulled into a gas station on our way to the Staples Center and goes, ‘Let’s buy some beers and drink ’em out of a red cup.’ I go, ‘That’s not going to be obvious.’ There we are at an AM/PM getting styrofoam cups and pouring our beers into them.”

The dispensary has reopened since the ordeal first unfolded. In regards to the apparent marijuana edibles, the DA’s office deemed there was “insufficient evidence that they knew the food items belonged to the dispensary and not their fellow officers or that SAPD personnel consumed any edible marijuana items available at the dispensary.”

In response, Matt Papas, the attorney representing James, claimed it was apparent what the officers were up to. “One of them talks about the candy bar, the edible, and says he’s starting to get light-headed,” Papas told local sources. “That would indicate to me that they’re eating marijuana edibles. They’re sitting right near a safe… where the edibles are located,” he added.

The video can be viewed below.