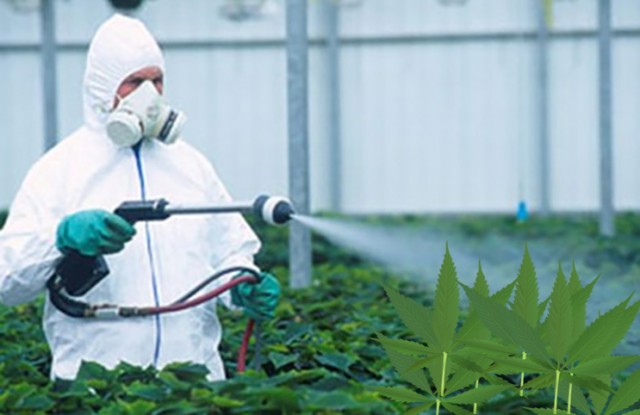 Conventional crops tend to be coated with noxious pesticides. Marijuana crops are no exception. As more and more states legalize marijuana for medicinal purposes, the next big issue for the alternative health community is to ensure that bud is free of dangerous pesticides.

Specifically, the cannabis business applied a pest control known as myclobutanil. When heated, it releases hydrogen cyanide, which can kill people in 10 to 60 seconds even in low concentrations. Although Washington assembled a lengthy list of approved pesticides for the marijuana industry, the state does not require pesticide testing since it is costly and convoluted.

“If a product tests very high for an unapproved pesticide, that will certainly increase the odds of recall. In the end, we may have to defend any potential recall action so a level of reasonableness will factor,” LCB spokesman Brian Smith said in a statement.

The health repercussions of smoking pesticide laced weed remain uncertain. Not much research has been conducted on the long-term impact these chemicals have on the human body when heated and inhaled.

“Because marijuana is often smoked or vaped and little is known about the effects of inhaled pesticides, it is important to learn more about the health effects of pesticide exposure both through inhalation as well as through ingestion of marijuana products,” said King County’s public-health officer, Dr. Jeff Duchin.

The U.S. Environmental Protection Agency (EPA) has not approved any pesticides to be used to cultivate cannabis; however, they have offered to hasten this type of research. Thus far, none of the states have accepted the EPA’s advancement. Since cannabis is a federally prohibited item, there are no established guidelines that dictate “safe” pesticide levels.

The discovery that marijuana producers were using illegal pesticides was brought about by customer complaints and public-record requests instead of the LCB’s safety measures, according to The Seattle Times. Additional reports suggest illegal pesticides could be much worse then previously believed, since the LBC mostly goes by the self-reports of  marijuana producers and sporadic site inspections.

One hurdle the alternative health community needs to overcome is insufficient regulation of state approved lab tests. An independent analysis found that labs yield vastly different results when testing cannabis for contaminants. Some labs never detect contaminants, whereas others detect contaminants almost 50 percent of the time. The LCB has no way to guarantee labs are using the same test methodology.

The benefits of farming organic marijuana

There are both medical and environmental benefits to be reaped from organically grown marijuana. In addition to boosting crop yields and potency, farming organic weed uses environmentally friendly methods, like sunlight and natural fertilizers.

Changing the game of the cannabis industry is beginning to take flame in California. A Los Angeles based medical marijuana company known as Med-X, Inc opened the first patient cooperative to cultivate 100 percent natural and organically grown medical cannabis for its research and development program, according to the organization’s website.

“We are releasing a new all natural insecticidal soil, our special proprietary blend refined through research. The soil protects the roots of the plant from pests while producing the kinds of crop yields cultivators hope for and expect,” said Med-X, Inc. co-founder Matthew Mills in an article for Criticl.

Communities where medicinal marijuana is legal rely heavily on the LCB and state regulators to assure that the cannabis they receive is safe. Unfortunately, effective regulation over the production of medicinal bud is lacking. The alternative health community would be well-advised to utilized companies like Med-X, Inc. to ensure their weed is clean.