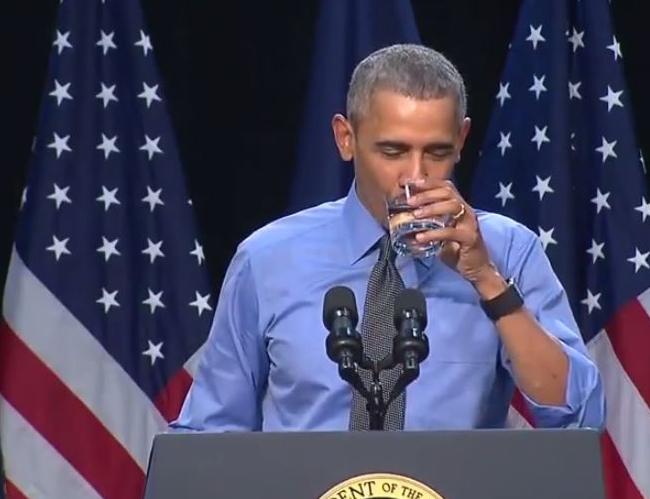 Residents of Flint, Michigan suffered for years before anyone cared to notice. The suffering will never end for some victims who have been permanently injured by lead-poisoned water. But that cold, harsh fact failed to faze President Obama, who swooped into Flint last week, drinking filtered water in front of the TV cameras in an attempt to prove everything’s OK now.

But the truth is, it’s not OK, and it never will be as long as our current governmental system remains in place, explains Chris Rossini on the Ron Paul Liberty Report.

“The President hopes to whisk away yet another embarrassment. But even after Flint disappears from the headlines, there’s a good health habit that everyone would be wise to follow: Don’t consume government water,” writes Rossini.

For years, testing has confirmed the presence of dozens upon dozens of potentially harmful contaminates in our city-regulated drinking water, including pharmaceutical drugs such antibiotics, antidepressants, tranquilizers, birth control pills, and sex hormones, as well as farming and fracking chemicals, fluoride, and other industrial toxicants.

The problem is so deeply rooted that even Obama is powerless in improving government water.

“The simple reason is that market signals and incentives just aren’t there for anything that is socialized. Whether it be government’s schools, roads, police, or water, when you don’t have profit & loss signals, you’re always flying in the dark,” explains Rossini.

“Government makes decisions politically. Every move is done for political reasons. They don’t have profits and losses to guide them. They don’t have customers that voluntarily give them money, and that can withhold money. Government steals every penny that it has.”

Regardless of how much money is dumped into the problem, a solution will never be found because the system is operating atop flawed policies which continue to be emboldened. The government has proven itself, time and time again, incompetent to manage most of what it’s supposed to be managing – including important resources!

“There is no ‘right’ to water. It’s a scarce resource like almost everything else. Government should never be in charge of allocating scarce resources,” says Rossini.

“Things can get so bad you end up with something like Venezuela. They’ve been dealing with severe water rationing lately. That’s where the absence of market prices, government price controls, and inflation can lead.

“Government water is a problem that will never be solved, purely because it is government that is running it. That’s why it’s a good decision not to ingest it. Find another alternative. Without private property, market prices, competition, profits & losses, government is always operating in the dark.”

Ensure your drinking water is clean and safe. Protect your body, as well as your future.