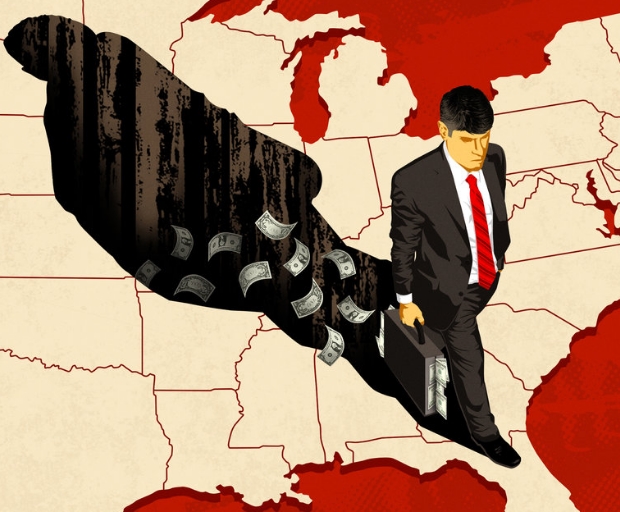 Our top-heavy economy has come to this: One man can move out of New Jersey and put the entire state budget at risk. Other states are facing similar situations as a greater share of income — and tax revenue — becomes concentrated in the hands of a few.

Last month, during a routine review of New Jersey’s finances, one could sense the alarm. The state’s wealthiest resident had reportedly “shifted his personal and business domicile to another state,” Frank W. Haines III, New Jersey’s legislative budget and finance officer, told a State Senate committee. If the news were true, New Jersey would lose so much in tax revenue that “we may be facing an unusual degree of income tax forecast risk,” Mr. Haines said.

The New Jersey resident (unnamed by Mr. Haines) is the hedge-fund billionaire David Tepper. In December, Mr. Tepper declared himself a resident of Florida after living for over 20 years in New Jersey. He later moved the official headquarters of his hedge fund, Appaloosa Management, to Miami.

New Jersey won’t say exactly how much Mr. Tepper paid in taxes. But according to Institutional Investor’s Alpha, he earned more than $6 billion from 2012 to 2015. Tax experts say his move to Florida could cost New Jersey — which has a top tax rate of 8.97 percent — hundreds of millions of dollars in lost payments.

Mr. Tepper, 58, declined to comment on his move. He does have family — his mother and sister — who live in Florida. But several New Jersey lawmakers cited his relocation as proof that the state’s tax rates, up from 6.37 percent in 1996, are chasing away the rich. Florida has no personal income tax.

“If you’re making hundreds of millions of dollars and you’re paying close to 10 percent to the state of New Jersey, you do the math,” said Jon Bramnick, the Republican leader in the New Jersey Assembly. “You can save millions a year by moving to Florida. How can you blame him?”

Beyond the debate on taxing the rich, Mr. Tepper’s move is a case study in how tax collections are affected when income becomes very highly concentrated. With the top tenth of 1 percent of the population reaping the largest income gains, states with the highest tax rates on the rich are growing increasingly dependent on a smaller group of superearners for tax revenue.
In New York, California, Connecticut, Maryland and New Jersey, the top 1 percent pay a third or more of total income taxes. Now a handful of billionaires or even a single individual like Mr. Tepper can have a noticeable impact on state revenues and budgets.
California had to account for a “Facebook effect” in 2012 and 2013 after that company’s 2012 initial public offering of stock. The offering generated more than $1 billion in revenue — much of that from the chief executive, Mark Zuckerberg, and a small group of company shareholders. Washington, D.C., had an unexpected $50 million gain in its 2012 fiscal year — which helped create a budget surplus — after the death of a local billionaire increased its estate tax receipts.
Some academic research shows that high taxes are chasing the rich to lower-tax states, and anecdotes of tax-fleeing billionaires abound. But other studies say there is little evidence showing that the rich move solely for tax purposes. Millionaires and billionaires who move from the high-tax states in the Northeast to Florida, for instance, may be drawn by the sunshine, lifestyle and retirement culture, in addition to lower taxes.
While some high earners may be moving for tax reasons, New Jersey, New York, California and other states are replacing rich people faster than they are losing them. New Jersey had 237,000 millionaires in 2015, compared with 207,200 in 2006, according to Phoenix Marketing International, a research firm. New York added 69,500 millionaires from 2006 to 2015, to 437,900, while California added over 100,000 millionaires, to 772,600.
The best solution to the mega-taxpayer dilemma, some tax experts say, is for states to do a better job of tracking and forecasting the incomes of their top earners. Since the rich are the most mobile and are able to manage their investments just as easily in Miami as in Manhattan, states are devising new ways to monitor their top taxpayers and keep them from leaving.
“In a time of rising inequality, I’m not sure the right answer is lowering taxes or making them less progressive,” said Kim S. Rueben, senior fellow of the Urban-Brookings Tax Policy Center at the Urban Institute. “It’s more about keeping an eye on people, seeing where they are and enforcing the tax rules.”
Connecticut, home to several hedge fund billionaires, now tracks the quarterly estimated payments of 100 of its top earners. Kevin B. Sullivan, commissioner of the Connecticut Department of Revenue Services, said about five or six of the highest earners could have a “measurable impact on the revenue stream.”
Mr. Sullivan said that when one of the state’s rich hedge fund executives planned to move his family and company to a lower-tax state, state officials met with him and persuaded him to leave some of his work force in Connecticut.

“We knew we were going to lose him,” Mr. Sullivan said. “But we wanted to keep some of the higher-paying jobs.” He said the state worked out a deal to keep the jobs in exchange for an agreement about the owner’s regular visits to family and friends in Connecticut. (Homeowners who spend more than 183 days in the state are considered residents for tax purposes.) He said the state was holding discussions with other top earners in hopes of keeping them.

“I’m not saying we’re sending fruit baskets and get-well cards,” said Mr. Sullivan, a former Democratic legislator. “But we’re trying to send a more welcoming message to the high earners as a group.”

New York is now more closely monitoring wealthy taxpayers who have homes in New York but claim Florida as their tax residence. And New Jersey is collecting data on all of the taxpayers who make more than $1 million to forecast their tax payments more accurately.

In California, 5,745 taxpayers earning $5 million or more generated more than $10 billion of income taxes in 2013, or about 19 percent of the state’s total, according to state officials.

“Any state that depends on income taxes is going to get sick whenever one of these guys gets a cold,” Mr. Sullivan said.

Hence New Jersey’s concern over Mr. Tepper’s departure. Whatever the reasons for his move, he is leaving for Florida at an especially opportune time for tax savings. Many hedge fund managers have for years used a tax loophole that allowed them to defer taxes on fees they earned through the use of offshore funds. A 2008 federal tax rule, however, requires them to declare those fees by the end of 2017 and pay any necessary federal, state and local taxes.

For some hedge fund managers, the amounts declared will probably be in the billions of dollars, accountants say. A spokesman for Mr. Tepper declined to comment on his overseas income. By moving to Florida, Mr. Tepper could avoid paying state income taxes on any such funds.

“If he’s bringing money back, you’re talking about a big possible gain,” Mr. Bramnick said. “So it’s a good time to move to Florida.”

Mr. Tepper regularly topped state wealth rankings as New Jersey’s richest resident. He also has homes in Miami Beach and the Hamptons. In 2012 and 2013, he also topped Alpha’s list of the highest-earning hedge fund managers, with estimated earnings of $2.2 billion in 2012 and $3.5 billion in 2013. His earnings fell to $400 million in 2014.

Mr. Tepper never publicly announced his move to Florida. But it became public on April 5, when Mr. Haines, citing a Bloomberg report, mentioned Mr. Tepper’s move in his remarks to the State Senate Budget and Appropriations Committee. In discussing the move, Mr. Haines said, “Even a 1 percent forecasting error in the income tax estimate is worth $140 million.”

Mr. Tepper’s payments may have even been higher. If Mr. Tepper earned $3.5 billion in 2013, his state tax bill could have been over $300 million, according to New Jersey accountants. Granted, his actual payments were probably far lower because of deferred income, charitable deductions and other accounting treatments. Yet Mr. Haines’s comments are believed to be the first time a state official has warned of a budget risk because of one resident’s relocation.

“We’ve had states mention risks from high-income groups, but never from a single taxpayer,” Ms. Rueben of the Tax Policy Center said.