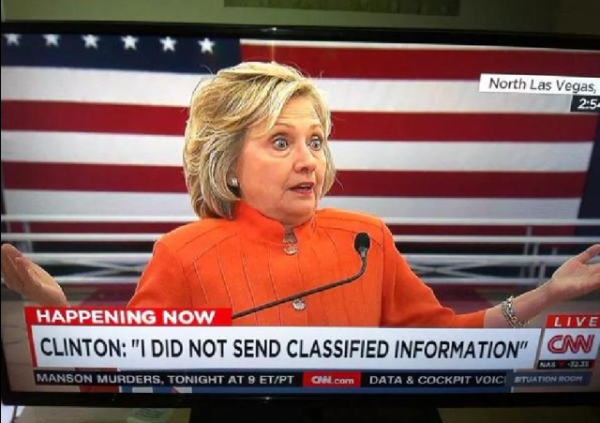 We have a serial liar running to be the “man” in charge of the U.S. corporate state. Nothing new here, although this year’s version is particularly pernicious, and obvious:

You’ve heard ad infinitum about the private email server Hillary Clinton used for official State Department business, but not so much lately about the deaths of four Americans in Benghazi, including Libya Ambassador Christopher Stevens in September, 2012. Seems that three and one-half years would be plenty of time for the House Select Committee on Benghazi, headed by South Carolina Congressman Trey Gowdy, to do some serious investigating. But that may be wishful thinking, says Accuracy in Media (AIM), because when the evidence is released, the results may not pack a definitive punch:

But what if there is evidence of malfeasance? Wouldn’t the committee be responsible for making a conclusion of what happened, rather than simply parrot words without connections? And what type of witnesses have been called? That’s also a problem, according to AIM, who points out the lack of depth, expertise and diversity from those who were asked to give testimony:

“So far, the committee does not appear to have interviewed outside experts—authoritative figures who could shine some light on the testimony of bureaucrats with ulterior motives.”

You gotta wonder if Congress folks read anything other than their own government propaganda. They could have easily accessed “The Rat Line and the Red Line” by Pulitzer Prize willing journalist Seymour Hersh. Published in April 2014, this report linked the Libya attack with weapons being procured and stored for operations in Syria:

“The Obama administration has never publicly admitted to its role in creating what the CIA calls a ‘rat line’, a back channel highway into Syria. The rat line, authorised in early 2012, was used to funnel weapons and ammunition from Libya via southern Turkey and across the Syrian border to the opposition. Many of those in Syria who ultimately received the weapons were jihadists, some of them affiliated with al-Qaida. (The DNI [Director of National Intelligence] spokesperson said: ‘The idea that the United States was providing weapons from Libya to anyone is false.’)”

Now what about the investigation of those classified emails? That’s an FBI led process. Surely they will gather all the facts, churn them diligently and, if the evidence is there, turn it over to the Justice Department with serious indictment recommendations, not so? Perhaps not, as suggested by Accuracy in Media (AIM):

“With 150 agents working on one of the FBI’s cases against Mrs. Clinton, it seems incumbent upon the Bureau to push the Justice Department to indict Hillary Clinton if it finds the corruption it is searching for. And, given recent evidence, it seems unlikely that the agency could do anything but charge her with mishandling classified information.

“Mrs. Clinton’s main defense has been that the information from her emails now deemed classified wasn’t marked as classified at the time. However, in 2011 Secretary of State Clinton instructed an aide, Jake Sullivan, to remove the classified markings before sending information to her private, unsecured email. Besides, it doesn’t matter legally whether this information was marked classified or not. That is a smokescreen. It is her professional obligation to recognize classified material.

“Yet President Obama has already put his finger on the scale of justice, asserting that Clinton’s email server ‘is not a situation in which America’s national security was endangered.’

“FBI Director James Comey faces a politically untenable choice—to pursue a case against the President’s wishes or to tarnish the impartiality of the law. Comey has a reputation as a straight-shooter to the extent that if he makes a criminal referral to the Department of Justice and they don’t act on it, he might well go public, or resign. Time will tell.”

It certainly will. And one fine day, the time for liars will run out.