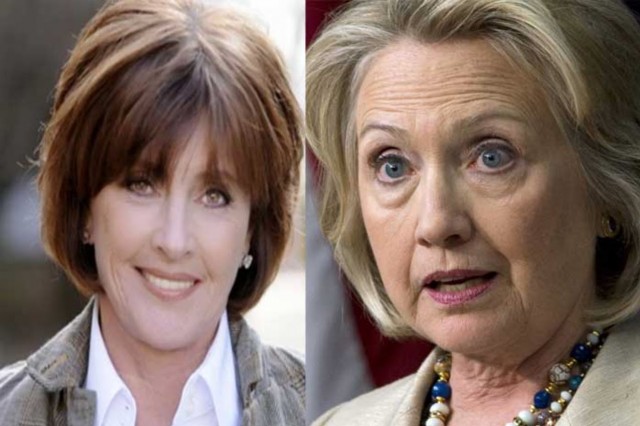 A lot of today’s voters who are considering casting a ballot for Democrat Hillary Clinton – because she says her likely GOP challenger Donald Trump is a lout and she is the bigger champion of “women’s issues” – don’t know anything about the various scandals that surrounded her and her husband when he was president of the United States in the 1990s.

But they’re learning. And before next November, they’re going to know everything about Hillary, her husband Bill and their antics – together and separately – that the old media has done its best to hide for years.

And one lady who’s doing her best to inform those who do not know the Clintons, while reminding those who do, is Kathleen Willey, herself a sexual victim of Bill Clinton’s and one of the many women whom Hillary tried to discredit and destroy – not to protect a philandering husband but his legacy in office and her future political career.

Willey has a Website – A Scandal A Day – that was established not just to shine a light on the various and sundry Clinton scandals, but also as a conduit for others who have been victimized by these two so they can come forward and tell their stories as well (via this tip line).

“If you or anyone you know has been assaulted or worse by Bill Clinton, and then threatened and intimidated by Hillary Clinton, expose it, don’t ‘just live with it’!” the page says.

“If you know of any person that is in a position of public trust and uses that power or position to harm, threaten or intimidate, let ‘a SCANDAL a day’ know and we will help you expose this wrongdoing.”

To listen to Kathleen’s story, click here, but the gist of it is this, as reported by The Daily Caller:

Willey was a life-long Virginia Democrat activist before joining the White House social office, having worked on the campaigns of Gov. Doug Wilder and attorney general Mary Terry. It was in 1993 when Willey said President Clinton assaulted her. In her 1998 deposition during Paula Jones’s sexual harassment suit against the former president, she described how Bill “put my hands on his genitals.”

According to Willey, the Clintons went to drastic lengths to prevent her from telling the truth in court. She describes a lunch her friend the late Christopher Hitchens had with Hillary’s email buddy Sid Blumenthal: “during this lunch with Sid Blumenthal, Christopher said something like ‘looks like you guys got some big problems now after that 60 Minutes interview.” To which Sid Blumenthal responded, ‘Well she may look good today…she’s not going to look good by Friday.” Hitchens afterwards filed an affidavit.

“As we get closer to the election, I would like to ask once again if there are any women out there who have been assaulted, sexually harassed, raped by Bill Clinton to please, please find the courage to write to me and tell me about it,” she told Aaron Klein Investigative Radio last Sunday.

“As we get closer to the election, we cannot let this woman back into the White House,” she continued. “This is one way to keep them out of the White House and get rid of them forever because they just need to go away. We’re sick of their dysfunctional family and all of their scandals every single day.”

Willey and the others do have one ally in the presidential contest: Donald Trump, who has accused his likely opponent of being an “enabler” for her husband.

At a rally in Spokane, Wash., earlier this month, Trump said Hillary – for going after Bill’s accusers – “was the worst abuser of women in the history of politics.”

Also, he said Hillary deserved the “enabler” moniker because “she treated these women horribly… And some of these women were destroyed, not by him, but by the way that Hillary Clinton treated them after everything went down.”