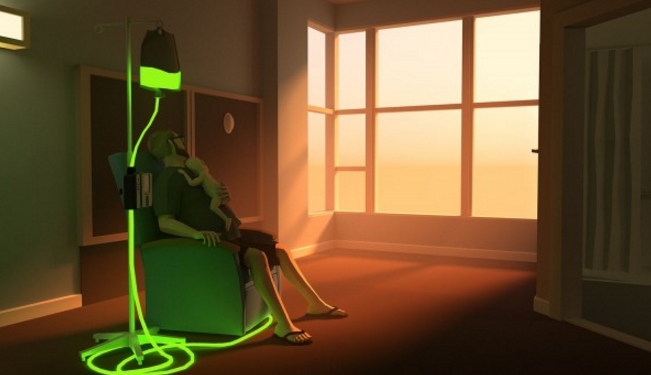 Every once in a while, our lives come to a grinding halt. Someone we love is diagnosed with a terminal disease and then dies.

Released in early January, the video game, ‘That Dragon, Cancer’ is about the process of grief. Departing from traditional shooting and sports games, Ryan and Amy Green created the game as a tribute to their late son, Joel, who passed away when he was only five years of age.

The game is an account of the trials and tribulations of the Green family as they cope with their son’s battle with cancer. It is closer to a moving story book than a conventional video game.

The Green’s live in Colorado where they spent the last three years creating the video game, along with a handful of artists and designers. One of the game’s designers, Ryan, quit his job to fully invest in the project.

“I feel like ‘That Dragon, Cancer’ is one of those breakthrough moments,” New School professor and author John Sharp told the New York Times. He is the author of the book “Works of Game,” which tries to yoke video games with art. “I think we may look back at this game and see this as a touch point, a moment of rethinking what people can do with interactivity.”

“That Dragon, Cancer,” contains audio from home movies and the film “Thank You for Playing,” which is based upon the Green family. It debuted last year at the Tribeca Film Festival.

The game reflects the Green’s internal temperament about their son’s cancer with visual analogies. For instance, when the doctor says there are no more treatment options for Joel’s cancer, the room fills with water.

Although there is a dragon, much of the game consists of everyday routines, including phone calls and hospital visits. Joel can be heard laughing throughout the game but the echoes of prayers for Joel by Christian parents are particularly impressionable.

The controls are designed to be limited. For instance, during a segment of the game, a go-kart race takes place in the hospital but players can’t control the speed of the go-kart. This triggered vexation among critics; however, according to Ryan, frustration is the entire point.

“All you can do is steer, hopefully,” he told sources.

The inability to control anything is intended to give gamers a hands-on experience of the peaks and valleys that accompany cancer treatment.

“One of the great strengths of video games is that automatically a player goes into a game expecting to have some agency,” Amy said to the Times. “And it felt like the perfect way to talk about cancer, because all a parent wants is to have some agency.”

A shift in gaming culture values

Many have questioned what the point is of making a video game with limited autonomy. Sharp compared the evolution of video games to the shift in paintings during the Italian Renaissance, when art began to be appreciated for its aesthetic appeal rather than for its functionality.

“It took hundreds of years to make this transition for painting,” he said. “So, looking at it through my art-historian goggles, it’s not really a surprise that there are folks who are outside the epicenter of the games community who make the assumption that if games aren’t escapist, they must be educational or therapeutic,” he added.

“That Dragon, Cancer” has received considerable attention from the mainstream media. Around 10,000 people have purchased the video game since it was released in January, which is diffident by video games standards. Especially when one considers that it took nearly three years to make.

“I always tell people, ‘You know those indie, artsy films that Ryan likes and no one else likes?’” Amy questioned. “There are video games like that.’”

Check out the game’s trailer in the video below.