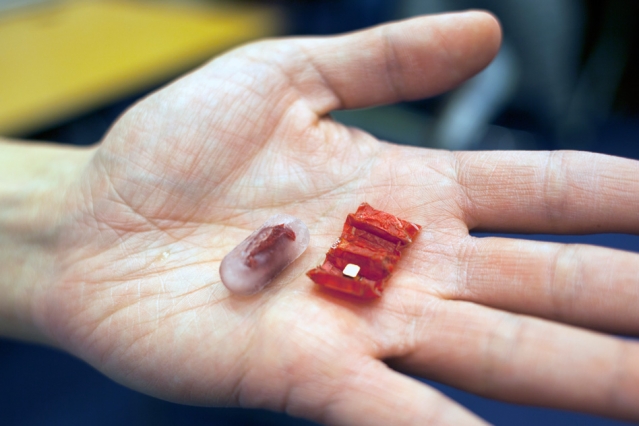 Researchers from MIT have created a small, swallowable robot to help fix internal wounds, administer medicine and remove objects from the stomach that have been accidentally ingested by children.

The researchers presented their work at the International Conference on Robotics and Automation, which follows  in the foot trails of a string of papers on origami robots by the group of Daniela Rus, the Andrew and Erna Viterbi Professor in MIT’s Department of Electrical Engineering and Computer Science, according to an MIT press release.

“It’s really exciting to see our small origami robots doing something with potential important applications to health care,” Rus said. “For applications inside the body, we need a small, controllable, untethered robot system. It’s really difficult to control and place a robot inside the body if the robot is attached to a tether,” she added.

The new robot unfolds whenever it enters the stomach, where it navigates through the acidic terrain with the help of external magnets. Using magnets to guide the robot inside the body isn’t without its own hurdles, however. Rus’s first task for the robot is to demonstrate that it can remove a swallowed battery from the stomach.

MIT reports that approximately 3,500 batteries are swallowed each year. These batteries can burn the tissue of the stomach and esophagus. The team believes the tiny robot could be utilized in these situations to locate the magnet, pull it out of the tissue and steer it towards the colon to be eliminated from the body.

The origami robot powers itself though a process known as “stick-slip” motion. The tractable surface of the robot allows it to latch to the stomach lining and move as the body flexes and changes shape. The biocompatible constituency enables the device to be more flexible in comparison to other robots. Approximately 20 percent of the contraption’s motion is fueled by a basic paddling force.

To determine whether the robot could remove a battery from the body, the researchers purchased a pig’s stomach and made a model of its cross-section with silicon. They pumped the model full of water and lemon juice to mirror the acidic environment of the stomach.

The team then conducted multiple test runs where they located and removed a battery using the robot. Rus says the next phase of the project is to “add sensors to the robot and redesign [it] so it’s able to control itself without the need of an external magnetic field.”

“Shuhei bought a piece of ham, and he put the battery on the ham,” Rus noted. “Within half an hour, the battery was fully submerged in the ham. So that made me realize that, yes, this is important. If you have a battery in your body, you really want it out as soon as possible.”

“This concept is both highly creative and highly practical, and it addresses a clinical need in an elegant way,” Bradley Nelson, a professor of robotics at the Swiss Federal Institute of Technology Zurich, said in the MIT press release. “It is one of the most convincing applications of origami robots that I have seen.”

Check the robot out in action in the video below: