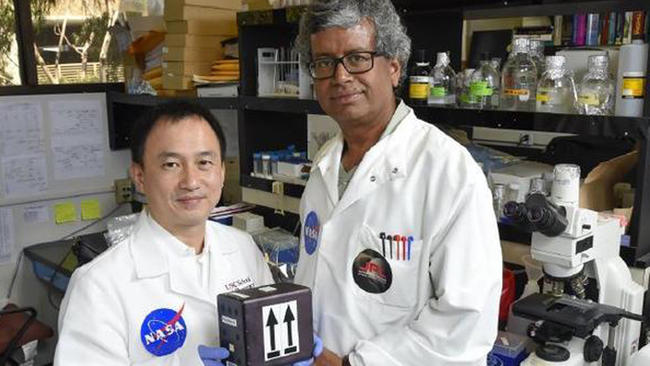 Researchers at the University of Southern California (USC) are sending four strains of fungi to the International Space Station in an effort to develop new medicines for use on Earth and beyond. The experiment will be conducted in collaboration with scientists from the university and NASA’s Jet Propulsion Laboratory.

“This is an ambitious project for NASA to see if we could have some breakthrough in space biology,” senior research scientist, Kasthuri “Venkat” Venkateswaran, said in a press release. “Until now, we have sent bacteria and yeast to the ISS. We have also exposed fungi to facilities outside ISS, but this is the first time we are growing fungi inside ISS to seek new drug discovery. NASA needs to develop self-sustaining measures to keep humans healthy in space because calling 911 is not an option,” he added.

Different types of fungi produce molecules known as secondary metabolites, which drug companies use to make pharmaceutical drugs. However, producing these molecules is not pivotal to the development and reproduction of fungi. Consequently, the specimens scarcely produce these molecules on Earth.

When medicine and space collide

“These drug-producing organisms do not make all the drugs they can make,” said lead author of the study, Clay Wang. “In most cases, the drug-producing pathways are silent. They only make the drugs when they need to,” he continued.

The researchers believe the stressful environment of the International Space Station will enable the fungi to produce the secondary metabolites. In particular, the team will analyze a well known fungus known as Aspergillus nidulan.

“The high-radiation, microgravity environment in space could prompt Aspergillus nidulans to produce molecules it doesn’t create in Earth’s less stressful conditions,” said Wang in a press statement. “We’ve done extensive genetic analysis of this fungus and found that it could potentially produce 40 different types of drugs. The organism is known to produce osteoporosis drugs, which is very important from an astronaut’s perspective because we know that in space travel, astronauts experience bone loss.”

In April, the scientists will launch the fungi to the International Space Station aboard a Falcon 9 rocket from the Cape Canaveral Air Force Station in Florida. After the fungi reach the space station, they will be placed in environmental conditions conducive to their development. The fungi will stay in the environment for either three or seven days, and then cooled.

The fungi are scheduled to return to Earth on May 10. This will be the first Cargo Resupply Services for SpaceX since the  CRS-7 exploded 139 seconds into its flight last year, according to Space.com.

Analyzing the genome of Fungi

As the experiment takes place, the same four strains of fungi on the space station will be grown on Earth. The researcher’s suspect that the extraterrestrial fungi will produce molecules that shield them from space radiation, which they do not need to produce while strapped to Earth.

“We know if there is high radiation, they will adapt, but we are not sure what that adaptation will be,” Wang noted.

Once the extraterrestrial fungi return home, the team will review the secondary metabolites they produce, and which genetic switches the specimens flipped to create those metabolites. With this information, the researchers can genetically tune the fungi to produce those same metabolites on Earth.

Although it’s possible that the fungi will produce nothing, Wang believes the experiment is worth doing:

“Even if it doesn’t make something new, I know it will make more or less of something in space, and that will allow us to figure out how to amplify a drug or make less of something we don’t want. This is one of those great experiments with no bad answer.”