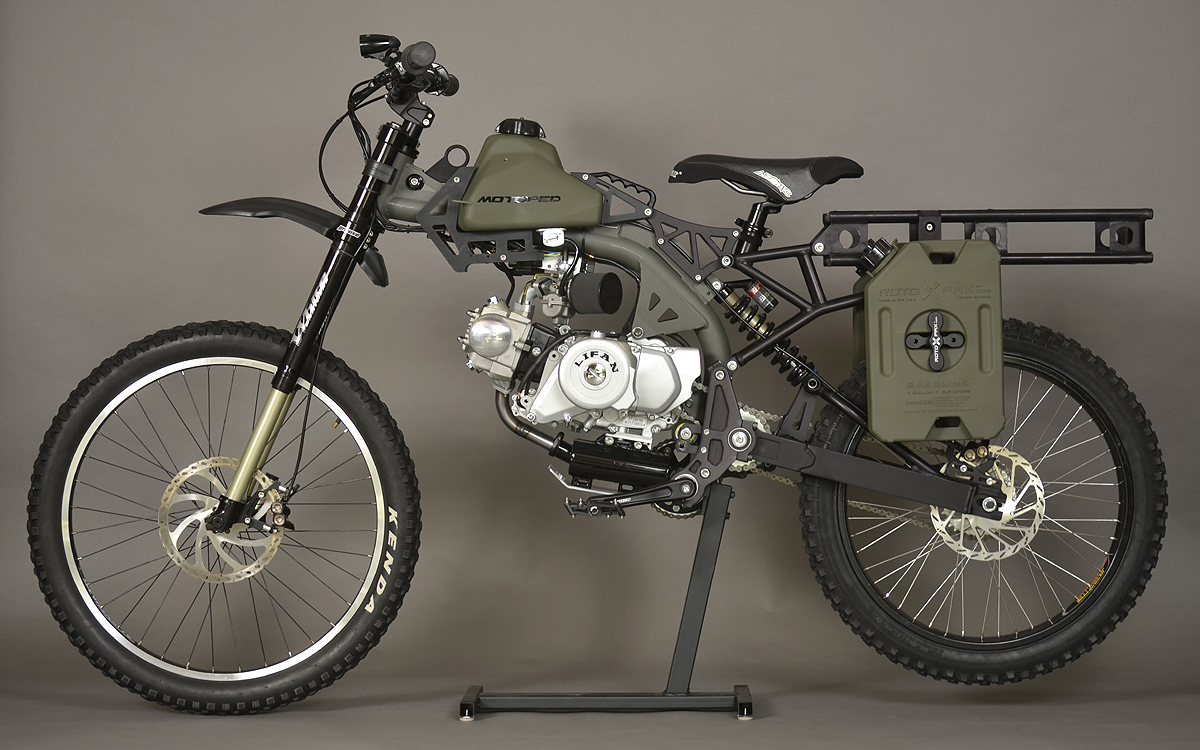 (Bugout.news) Outfitting preppers has become big business, and there are a lot of nifty products appearing on the market aimed at those who wish to cover all the bases in anticipation of a potential SHTF scenario. Freeze-dried foods, survival equipment, high-tech weaponry — there are hundreds, maybe thousands of products available geared towards the modern-day survivalist.

Most of us have bug-out bags at the ready and are constantly modifying and improving our stockpiles, equipment and survival strategies, so it’s always nice to see new developments in survival technology — whether or not we can actually afford to purchase them.

A case in point is the Survival Bike from MOTOPED — the perfect gift for the “prepper who has everything.” Before I scare you away with the actual price, let me make you want one as badly as I do…

The Survival Bike is actually a moped designed to be, as the MOTOPED website puts it, “a utilitarian, military-inspired super-hauler,” ideal for bugging out in style on two wheels. It has a primary fuel tank and two auxiliary tanks which allow up to 500 miles of travel without a fill-up.

Like all true mopeds, it can be pedal-driven as well as engine-powered, which could make it very useful in a number of situations — for instance, if stealth is required, pedaling the Survival Bike would not attract attention due to engine noise.

It comes equipped with “a universal rack that accepts a myriad of bolt-on mounts, harnesses, and fitments,” which allows for wide range of payload configurations, although with a mere 49cc, 2.47 horsepower engine, the amount of stuff you’ll be able to carry will be limited — especially if you’re any larger than a horse jockey or a ballerina. However, the makers claim that the rack will accommodate up to 50 pounds of gear, which is a respectable amount, I reckon, for a small two-wheeled getaway vehicle.

The Survival Bike is essentially a mountain bike with a motor. It has a rugged-looking design which, in theory, makes it a quite versatile bug-out vehicle — it could prove to be very handy in situations where one might be traveling on-road and off-road.

With a top speed of 24 mph, you won’t be able to outrun much of anything other than possibly someone chasing you on foot, which makes one wonder whether or not a dirt bike would be a better choice, but once again, the ability to pedal the Survival Bike is an advantage that a standard motorcycle doesn’t offer. A dirt bike is great until you run out of gas and can’t obtain any more, and dirt bikes make a hell of a racket.

For those who really love the concept (and who perhaps have more money than brains) wishing to go a step further, MOTOPED offers the ultimate moped survival vehicle: the “Black Ops” edition of the Survival Bike.

The Black Ops edition is an upgraded version that includes additional features, some of which might be seen as useful — others perhaps as overkill, or even downright silly “bells and whistles” — such as a crossbow, hatchet, shovel, climbing rope and karabiners.

My impression is that the basic Survival Bike is a nice concept and, even at a base price of $2,499, might be a worthwhile purchase for those who can afford it.

The Black Ops edition seems suited mostly for rich guys who want to invest in a survivalist status symbol. I think that a personally customized version of the basic Survival Bike makes a lot more sense than shelling out the extra thousand bucks or so for the added features that come with the Black Ops edition.