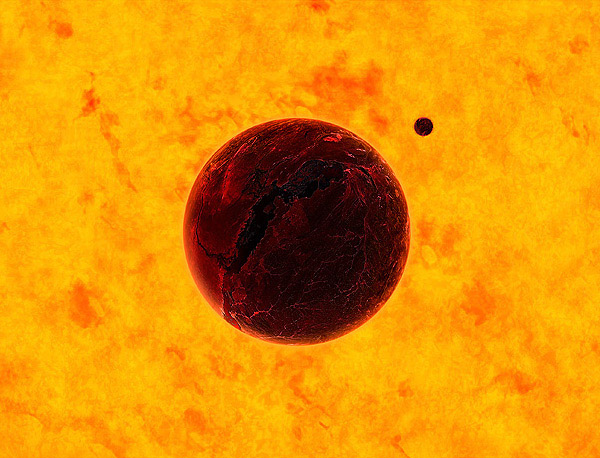 Doomsday is a lot closer than you might think, but don’t worry; scientists have contrived a variety of possible ways we might be able to survive the impending apocalypse.

Although the sun isn’t expected to burn out for another 6 billion years, astronomers believe in about 500 million years, the gradual swelling of the sun will render Earth uninhabitable. That is, of course, if humanity doesn’t annihilate itself with nuclear weapons or a major asteroid doesn’t bring about the next mass extinction before then.

But that doesn’t necessarily have to be the end of the story. Columbia University astrophysicists Michael Hahn and Daniel Wolf Savin explain how future inhabitants might be able to save Earth and humanity from the scorch of the sun in an essay appropriately titled, “How to Survive Doomsday.”

Turning Mother Earth into a mothership

In one scenario, the duo suggest human descendants could save mankind by physically moving Earth’s orbit into a more habitable region. “If we fired a 100km wide asteroid on an elliptical orbit that passed close to the Earth every 5,000 years, we could slowly gravitationally nudge the planet’s orbit farther away from the sun, provided that we don’t accidentally hit the Earth,” the scientists explained in their paper.

Another way to keep Earth bound to the habitable zone is to latch a massive solar sail to the planet. It would have to be at least 20 times the diameter of our little blue world, however. In theory, this would gradually push the planet away from the sun as photons interact with it, in a similar way a kite flies in the wind.

In other words (worlds), the scientists suggest turning Mother Earth into a mothership that sails across the cosmic ocean in search of habitable waters. “Strategies like these could, in principle, keep the Earth in the habitable zone until the sun expands into a red giant,” the astrophysicists wrote.

The sun grows brighter at a rate of about 10 percent every billion years. Earth is able to counteract this brightness by reducing the thickness of its ‘warming blanket’ of atmospheric carbon dioxide. With less carbon dioxide, however, plants will gradually die out, leading to a depletion of oxygen. As a result, large animals will start to die off. Survivors will have to flee to the poles, but in about 1.5 billion years, even the poles will be too hot to sustain life; not even cockroaches will survive.

Uploading consciousness onto a computer

The weirdest means of survival the authors suggest is to download ourselves onto machines. This is a contentious point in philosophy of mind. If we eliminate the possibility of anything nonphysical about consciousness, in theory, the biological substrate of the mind could be copied onto a different substrate, like silicon. This is known as the computational theory of mind, which states the mind isn’t just like a computer. It is a computer.

Opponents of this view suggest while it is possible to reproduce the function of a system, it is not possible to replicate the internal, qualitative dimension of any conscious entity. The robots, in essence, would be physically indistinguishable from ourselves but phenomenally different. However, proponents of this view have yet to explain what the physical residue is within a biological system that prevents it from being replicated onto something else.

The authors of the paper recognize that this approach to survival is well beyond current capabilities and would require, “advanced computing resources and deeper understanding of neuroscience.” Nevertheless, the researchers believe these hurdles will likely be overcome in the next few million years.