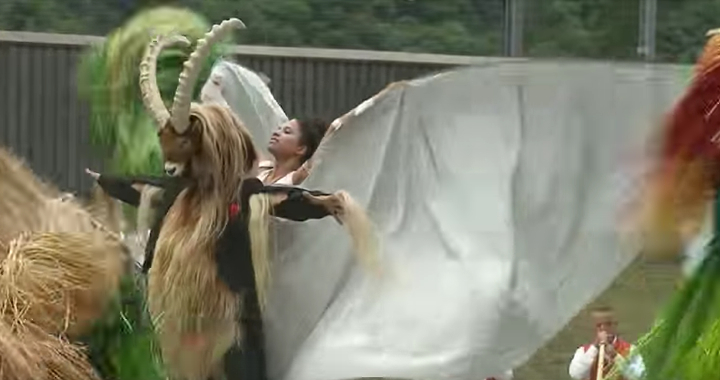 The Swiss Gotthard Basis Tunnel winds its way through the Swiss Alps, serving passengers and freight traveling from Switzerland, Italy, Germany and France. Over seventeen years in the making, it is an extraordinary feat of Swiss engineering, and the longest underground rail tunnel in the world, measuring 57.1 KM, or just over 35 miles. Excavators removed over 282 million tons of solid rock. But what caught the attention at the opening ceremonies was the decidedly demonic flair flashed throughout the event. It’s clear that Janet Jackson’s choreographer didn’t smooth out any moves of the somber looking orange-suited zombies who slithered about.

There were two celebrations — outside, at the tunnel entrance for common spectators — and then inside the tunnel for the elite, according to the Newamerican.com.

“This ceremony was a high-profile affair, too, attended by a plethora of European leaders. Included among the guests were French President Francois Hollande, Italian Prime Minister Matteo Renzi, German Chancellor Angela Merkel, and the President of Switzerland Johann Schneider-Ammann. . .”

The demonic dark side of the elites think they rule the planet know their time is up.

No matter where one viewed this spectacle, inside the cavernous walls or at the fringe of the outside tunnel entrance, the pagan and dark arts were prominently and proudly displayed. The worship of a whipping goat man, replete with moans and groans, androgynous semi — naked dancers in blatantly sexual poses, eerie music, a winged baby, rolling, frolicking haystacks (well known as “Uglies, or Hobelspanler in Swiss mythology) bells, tones, groans, mountain excavating video, Egyptian scarabs, beating drums, chains. whips, leather, fire and other hedonistic, pagan and demonic symbolism.

Here’s a look at what mind controlled plebeians got to see during the outside ceremony.

The Swiss Gotthard Tunnel pagan extravaganza is not the first, nor will it be the last.

A number of people died in the formation of this rail tunnel. One wonders if satanic sacrifice will be a part and parcel of its future offerings. In terms of the popularity of these pagan demonic ceremonies, you would have to live in a cave if you hadn’t noticed the surge of these themes taking over music, social media, educational materials, churches and city halls.  Remember the nation’s first state sanctioned Satanist ceremony on the steps of the capitol building in Lansing, Michigan?  This took place in December of 2019.

Chatter abounds on the internet. Many people have expressed their concern about this blatantly demonic event. To allay the fears of the UK public, the Inquisitor reported that the BBC said the ceremony was, “nothing more than a ‘lavish performance’ that was intended to be a representation of an array of aspects the culture in Switzerland.” If this is the norm in Switzerland, I don’t think I’ll be visiting anytime soon.

The opening ceremony at CERN followed a similar dark theme.

The dancers movements and theatrical presence of the spectacle was reminiscent of the opening of another underground tunnel celebration at CERN’s Large Hadron Collider in Geneva. The Huffington Post said the film project that documented that event — called Symmetry — “combines the best parts of opera and dance with the titillating rigor of digital art and physics to create a visual narrative that explores the philosophical elements of the giant particle accelerator.”

That’s an interesting way of putting it.