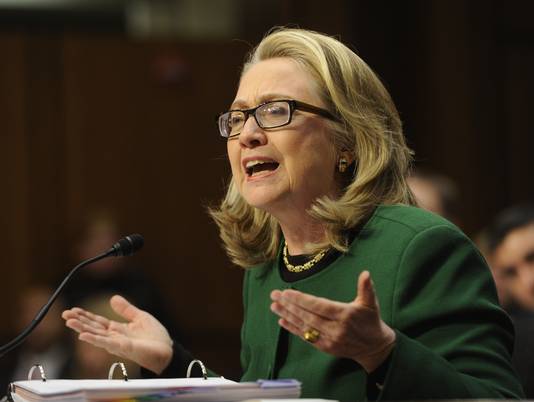 (Clinton.news) For several months now, as the federal investigation into presumptive Democratic presidential nominee Hillary Clinton’s use of a private, unsecured email server during her tenure as secretary of state unfolded, the candidate has repeatedly lied both about what she did and didn’t do, as well as what kind of investigation was actually taking place.

Now, it appears, another lie has been exposed.

Clinton has said she never sent or received any email “marked as classified,” but, writes John Schindler at The Observer, a recent State Department Inspector General’s report noted that it “leaves no doubt that Clinton has lied profligately about EmailGate from the moment the scandal broke over a year ago,” and that includes the lie regarding classification on some emails.

To make matters worse for Hillary, it recently emerged that at least one of the emails she handed over to investigators under subpoena in fact did contain classified information that was marked as such. The April 2012 email chain discusses an impending phone call with Malawi’s new president. The important part is an email from Monica Hanley, an aide, to Clinton, including the “call sheet” for the secretary. In layman’s terms, this was a note for Secretary Clinton telling her what she needed to discuss during her scheduled phone conversation with a foreign head of state.

We don’t know what that was, however, since most of that email has been redacted as classified at the Confidential level, the lowest classification level in the U.S. Government. The smoking gun here is that the call sheet begins with the line: “(C) Purpose of Call: To offer condolences on the passing [of] President Mutharika and congratulate President Banda on her recent swearing in.

Everything after that has been redacted. But that “(C)” is what is termed a “portion marking,” a tip-off to the reader that the paragraph following is classified.

Schindler notes further that it will be difficult at best for the FBI to ignore at least this willful violation of statutes (not ‘rules,’ federal statutes) governing the handling of classified materials. Add that to the fact that other reports have noted Clinton’s unsecured emails also contained the names of clandestine CIA operatives, which may have put them at risk and may be a violation of a 1982 law, the Intelligence Identities Protection Act, and you have a perfect storm of illegality and threats to national security that prove, beyond a doubt, that Clinton is not suited to be president.

And yet, it might not matter at all if the FBI decides there is enough evidence to recommend Clinton be indicted by the Justice Department – which is run by an Obama appointee, who answers to the president.

“Make no mistake, there are more than a few senior intelligence officials in Washington, DC, who are livid about Hillary Clinton’s willful disregard of clearly defined laws on the handling of classified information. Her misconduct endangered sensitive intelligence programs – and lives,” Schindler – a former NSA analyst, Navy officer and War College professor, said, adding that, if Obama punts on prosecuting her, “there are high-ranking spies who are perfectly willing to leak the sordid details of EmailGate to the media…”