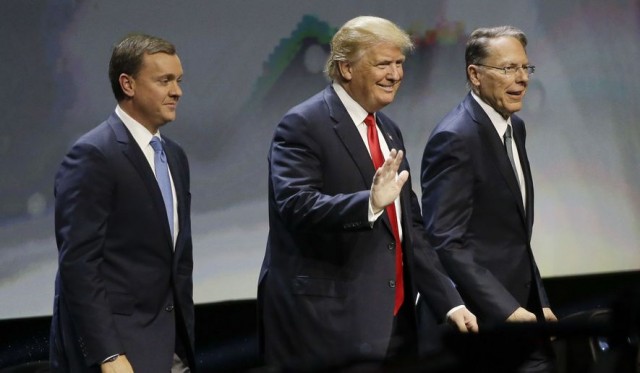 (Trump.news) The National Rifle Association has endorsed likely GOP presidential nominee Donald J. Trump but that doesn’t mean the organization is changing long-held positions regarding the Second Amendment in general and responsible firearms ownership in particular.

Following the horrific attack on an Orlando nightclub frequented by gays, Trump criticized President Obama for doing too little to combat global terrorism, while also saying that his prospective Democratic opponent, Hillary Clinton, would be equally bad in doing so.

“If some of those wonderful people had guns strapped… right to their waist or right to their ankle and this son of a bitch comes out and starts shooting, and one of the people in that room happened to have it and goes ‘boom, boom,’ you know what, that would have been a beautiful, beautiful sight,” Trump said.

Normally the NRA is also highly critical of such zones because, the organization rightfully points out, they are often chosen by mass murderers because unarmed people make easier targets.

But this time around Trump’s comments did not sit well with the organization, which pointed out that places of business involving alcohol consumption – like the Pulse nightclub attacked by the ISIS-inspired jihadist last week – are not places where patrons ought to be brandishing firearms.

In an interview NRA Executive Director Chris Cox said “of course” club-goers should not be armed.

“No one thinks that people should go into a nightclub drinking and carrying firearms. That defies commonsense. It also defies the law,” he said.

At the same time, Cox appeared to give Trump some benefit of the doubt on his comments, saying: “What Donald Trump has said is what the American people know is [common sense], that if somebody had been there to stop this faster, fewer people would have died.”

Wayne LaPierre, NRA executive vice president, also told CBS’ “Face the Nation” on Sunday that no, he doesn’t believe “you should have firearms where people are drinking.”

Later, LaPierre clarified his comments on Twitter, saying, “I want to clarify my comment: if you’re going to carry, don’t drink. OK to carry in restaurants that serve alcohol.”

In some states concealed carry permit holders are permitted by law to carry guns inside places where alcohol is served, and gun rights advocates say that is the way it should be, given that the founders did not place any carry restrictions on guns when they wrote – and states adopted – the Second Amendment.

And as for Trump, he later clarified his remarks. He tweeted: “When I said that if, within the Orlando club, you had some people with guns, I was obviously talking about additional guards or employees.”

As for the NRA, as reported by The Washington Times, it also clarified another misunderstanding with Trump over the weekend. Following the Orlando shooting, some reports suggested that Trump was going to push the NRA to supporting new legislation giving the government authority to deny anyone on a terrorism watch list the right to a gun.

But the candidate and the organization instead came out and said that the FBI ought to be investigating anyone on a terrorist watch list, naturally, but that if they had done nothing wrong they should not be denied their Second Amendment rights. Also, both have said government watch lists are notoriously inaccurate because they are overly broad.