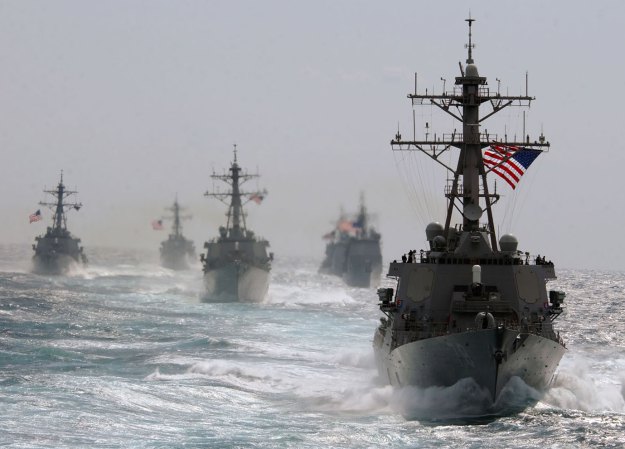 (NationalSecurity.news) [Reuters] Russia and the United States gave contradictory accounts on Tuesday of an incident involving the two countries’ navies in the Mediterranean Sea on June 17, each blaming the other for what they said were unsafe maneuvers.

The Russian Defence Ministry said a U.S. destroyer had approached dangerously close to a Russian warship, and protested at what it said was a flagrant U.S. violation of rules to avoid collisions at sea.

However, a U.S. Defense official, speaking on the condition of anonymity, said the Russian warship had carried out “unsafe and unprofessional” operations near two U.S. Navy ships.Recent months have seen a number of similar Cold War-style incidents at sea and in the air, with each country’s military accusing the other of dangerous approaches in international waters and airspace.

In one such case, the U.S. military said in April that Russian SU-24 bombers had simulated attack passes near the USS Donald Cook in the Baltic Sea, with one official describing them as one of the most aggressive interactions in recent memory.

U.S. Secretary of State John Kerry said at the time that the behavior of the Russian pilots was provocative and dangerous, adding that “under the rules of engagement that could have been a shoot-down.”

Russia’s Defence Ministry, uneasy about increased NATO activity close to Russia’s borders, said the latest incident “shows that it is U.S. sailors who allow themselves to forget the basic principles of safe seafaring and not to think about the eventual consequences of this dangerous maneuvering in regions with intense navigation”.

The incident involved the USS Gravely and the Russian Navy frigate Yaroslav Mudry, the Russian Defence Ministry said in a statement. The Gravely approached the Russian vessel at a distance of 60-70 meters (65-75 yards) from the port side and crossed in front of it, it said.

At the time of the incident, the Russian ship was in international waters in the eastern Mediterranean, cruising steadily and without making any dangerous maneuvers, the Russian statement said.

The Russian ship came within 315 yards (290 meters) of Gravely and five nautical miles of the USS Harry S. Truman, the U.S. official said.

“These actions have the potential to unnecessarily escalate tensions between countries and could result in a miscalculation or accident that results in serious injury or death,” the official said.

The Defense official added that the Truman and Gravely were conducting routine operations in support of the campaign against the Islamic State militant group.

The Pentagon was following up on the incident with Russia through military channels, U.S. Lieutenant Colonel Michelle Baldanza, a Pentagon spokeswoman, said in a statement.

(Reporting by Dmitry Solovyov and Alexander Winning in Moscow and Idrees Ali in Washington.; Editing by Mark Trevelyan and Frances Kerry)