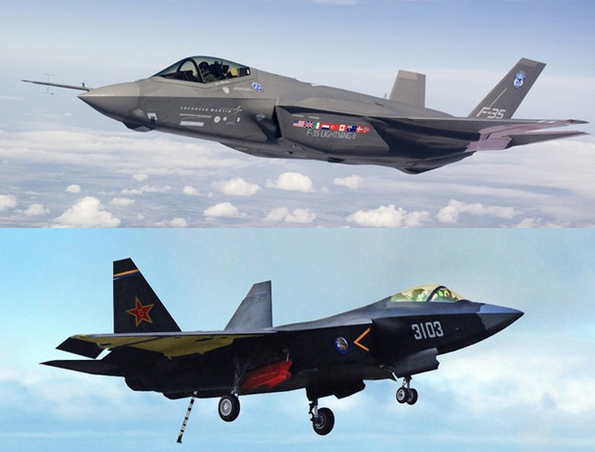 (NationalSecurity.news) “If you put a fourth-[generation F-15 or F-16 fighter] in there, they’re gonna die.”

That’s the conclusion of Air Force Maj. Gen. Jeff Harrigian, who wrapped up a tour at the Pentagon recently in wrapping up plans about how to integrate the services’ two most modern fighters, the F-22 and the F-35, into battle against an advanced adversary like China.

As reported by Defense One, Harrigian, along with Air Force Col. Max Marosko, deputy director for air and cyberspace operations at Pacific Air Forces in Hawaii, laid out how they would use deploy the aircraft in a new report that was published last week by the Mitchell Institute for Aerospace Studies.

Titled, “Fifth Generation Air Combat: Maintaining the Joint Force Advantage,” Harrigian and Marosko noted that such aircraft have “come of age” and are “now a critical element in U.S. power projection and combat operations.”

The nub of the report is this: Much needs to change in the way the Air Force deploys combat aircraft in battle with and advanced adversary.

“In our minds, what this comes down to is the ability to kill and survive,” Harrigian said, as reported by Defense One.

While Air Force officials have often discussed how advanced technology contained in the F-35 and other planes will give the U.S. a distinct combat advantage in the skies, the new report provides never-released detail from a senior officer how the planes could be used in war – and survive.

As Defense One reported further:

In the fictitious war of 2026 they present, the enemy tries to jam radar and radio signals, allowing only stealthy planes like F-22 and F-35 fighters and B-2 and B-21 bombers to fly safely and strike targets, which are guarded by mobile surface-to-air missiles.

The Pentagon would spread its fighter jets around the Pacific in small numbers to military and civilian airfields, some as far as 1,000 miles from the battlefield, to prevent enemy ballistic and cruise missiles from delivering a devastating knock-out blow to a base. Today, the Pentagon tends to concentrate the majority of its planes at regional super bases.

“During the initial days of the conflict, F-35s occasionally return to their bases – only to discover several are heavily damaged from enemy missile attacks,” Harrigian and Marosko write, in their scenario.

Those F-35s will be forced to divert to civilian airfields and by that time, F-22s and F-35s won’t need air traffic controllers because their high-tech computers will guide them to friendly runways, even if the weather is bad.

Increasingly, older fighters like the F-15 and F-16 must operate further from the theater of conflict due to newer, longer-range and higher-tech air defense missiles. Plus, those planes are much easier to spot on radar.

While the report does not list China specifically as the enemy, the war scenario takes place in “a key region abroad,” where aircraft must divert to Australia.

Also, only China and Russia have the kind of advanced defenses, along with fifth-generation warplanes, that the U.S. is most likely to face, but Russia – in the scenario – is out of range.

But in order to win this war of the future, combat aircraft and tactics will need to dramatically change, the Air Force officers note in their report. F-22s and F-35s will need to fly more frequent missions than current aircraft and, unlike most of those missions today, the fifth-generation aircraft will receive information and targeting data from command centers via high-tech computers and communications gear. Thus, connectivity upgrades will need to be made to older planes so all can communicate.

“There’s going to be a huge reliance on all that data … getting back to the mother ship,” Marisko said.