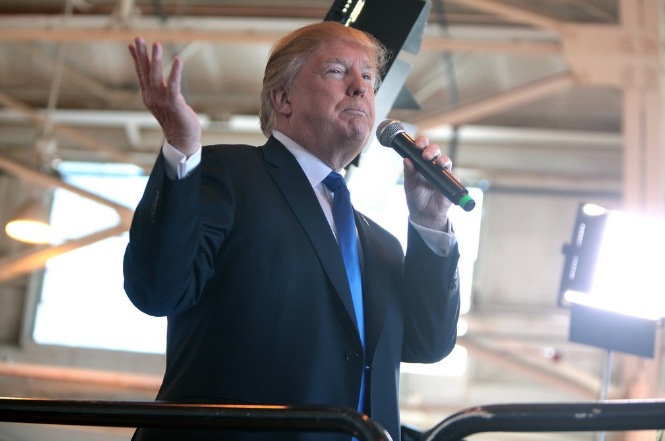 In an interview with 60 Minutes  Donald Trump said that the constitution is not always relevant and in many instances, such as immigration, it may have to take a back seat to his policy initiatives. He is arguing, as many Supreme Court justices have in the past, that the constitutions attempt to guarantee liberty does not allow the nation to commit suicide to do so. In other words, he is seeking the power to override the constitution where he sees fit whether you agree with him or not. Granted, many people are likely to agree with Trump on the issue of immigration, particularly from Muslim nations; however, this does not change the text of the constitution. For instance, The Fourteenth Amendment, as we all know, guarantees those born in the United States are born natural citizens and Article 1 Section 8 states that the legislative branch is responsible for determining who is or who is not able to be naturalized as citizens of the United States. To put it in another way, congress is responsible for determining immigration law, not the president. These are important issues to think about considering the fact that millions of Americans believe that Donald Trump is the candidate that will uphold the constitution. Not that Hillary Clinton would, God forbid she should become president; however, it is increasingly obvious that Donald Trump is not the conservative hero that millions are anticipating.

What we are witnessing in the 2016 presidential race is a social change strategy designed to push the attitudes of the Republican Party further to the left in acceptance of the Democrat agenda. Donald Trump has expressed support for many policy initiatives of the left such as gay marriage and the transgender issue. If you remember, the left has long pushed the opinion that in order for Republicans to be relevant they would have to embrace these changing norms. Virtually the whole country has come to terms with the fact that there is very little difference between Republicans and Democrats. There are differences, though they are becoming less clear. Donald Trump for example, has stated that he is pro-life; however, he also advocates for abortion in the case of unwanted pregnancies.  He also supported Bill Clintons assault weapons ban and advocated for longer wait periods to purchase a gun despite the fact that he is now running as a pro gun candidate. Let’s not forget the fact that in 2015 he said he identifies as more of a Democrat and he also stated that the economy does better under Democrats.

Many people believe that he simply changed his position on the gun issue but it is more likely, in this author’s opinion, that he will change his position under pressure.  After all, he did say the constitution does not give us the right to commit suicide as a nation. So, it is highly probable the continuing violence against police will be used by Trump to revert to the gun policies he once supported despite what he says about the Second Amendment now.

Many people are voting for Trump because they believe that he will adhere to the constitution; however, what they are really doing is supporting another candidate that will use the power amassed by the executive branch to pass executive orders that support their worldview. It’s not the president’s job to determine immigration policy, nor is it the president’s job to make law, but the masses will accept this if it supports their view. How is that adhering to the constitution? Many people make the argument, and it may be true, that the Fourteenth Amendment only applied to free slaves, and not people who happened to be born to people who immigrated here. Well, the left argues that the Second Amendment means that only a body regulated by the government has the right to bear arms, despite what the text actually says. So what’s really happening is we are being forced into arguments about what the constitution really means while the environment around us is being changed in a way that forces us to look at the possibility that it may need to be changed, or that we may need to accept that it is not relevant in certain circumstances.  Is it possible that the real purpose of the mass immigration is to get us to accept dictatorial powers to solve it in much the same way that the shootings are being used to change people’s opinions about the Second Amendment? Well, whether you are Trump supporter or not or whether you agree or disagree with the immigration issue, the fact that millions of people will accept him signing executive orders when the reason they are allegedly voting for him is to stop Obama’s executive tyranny answers that question.  To understand this fully we need to once again refer to the quotes of B.F. Skinner and how a changing environment can control a person’s behavior.

Autonomous man is not easily changed: in fact, to the extent that he is autonomous, he is by definition not changeable at all. But the environment can be changed, and we are learning how to change it. The measures we use are those of physical and biological technology, but we use them in special ways to affect behavior. (Skinner Beyond Freedom and Dignity, pp. 101)

In this author’s educated opinion, this is proof of the points being made.  The environment is being changed to force people to accept the false idea that our constitution is no longer relevant and in order to fix some drastic problems it will have to be ignored in favor of some form of dictatorial power. Sorry folks, but in so many words this is what Donald Trump said in his interview and it is what Barack Obama has pushing for the past eight years.

To find further evidence that suggests this theory is true we have to look no further than Saul Alinsky’s Rules for Radicals. Everybody knows that both Hillary Clinton and Barack Obama are disciples of Alinsky. Clinton personally knew the man and wrote her college thesis “There is only the Fight” on his radical methods and Obama taught the principles of Rules of Radicals as a community organizer.  For instance, consider the following quote, which is probably the most convincing piece of evidence which suggests we are being manipulated to accept things we normally wouldn’t.

There’s another reason for working inside the system. Dostoevski said that taking a new step is what people fear most. Any revolutionary change must be preceded by a passive, affirmative, non-challenging attitude toward change among the mass of our people. They must feel so frustrated, so defeated, so lost, so futureless in the prevailing system that they are willing to let go of the past and chance the future. This acceptance is the reformation essential to any revolution. (Alinsky, Rules for Radicals)

This is exactly what has happened. We have been brought to the point of absolute desperation while living in a state of complete hopelessness about the future of the nation, and we have accepted Donald Trump as a candidate in the hopes that he will fix everything.  In all honesty, people’s attention shouldn’t be on Donald trump, it should be on the idea that our environment is being manipulated to manufacture hopelessness in an effort to control our choices. This however, is giant leap for many people because they fear being labeled as a conspiracy theorist.

Another point to consider from Rules for Radicals is the eighth and ninth rule of tactics which state the following:

Rule number 8: Keep the pressure on with different tactics and actions and utilize all events of the period for your purpose.

Rule number 9: The threat is usually more terrifying than the thing itself.

Is it possible that the social controllers know that there is little chance another Democrat would win in 2016 and in effort to ensure portions of their agenda are carried forward they deliberately showed us the depths of corruption concerning Hillary Clinton so that we would easily accept Trump in her place? People will balk at this idea because they are so certain that Donald Trump is the conservative that will fix everything. If you’re one of those people just remember that Donald trump donated money to the Clinton Foundation, claimed that Democrats do better with the economy, supported a gun ban, supports the transgender issue and believes that the constitution should be ignored to solve certain problems.  To further elaborate on this thesis consider the Project New American Century. This is the battle plan, written during the Clinton Administration, which enabled George Bush to launch his wars against Iraq and Afghanistan.  The full plan included the overthrow of several Middle Eastern Countries including Syria, Libya and Egypt, among others. If you haven’t noticed Barack Obama has carried on with these wars and successfully completed the overthrow of Libya.  There was virtually no way that the American people were going to accept another president that was going to send us into more wars, which at this point people were convinced the Republicans were nothing but war mongers, so they invented the Barack Obama personality. Its funny, because Obama has been so successful in blinding the American people that he has carried on the same wars that were originally planned in the Project New American Century documents, but because he spent his entire presidency rabble rousing against Republicans, no one would believe it no matter what evidence you provided. Such is the effectiveness of psychological manipulation.

Either way the America we have known is finished. We have been brought to accept the idea that having a president who issues executive decrees to suit our needs is fine and dandy and it is because behind the scenes there is a power manipulating world events in a manner which forces people to change their behavior and attitudes towards change.