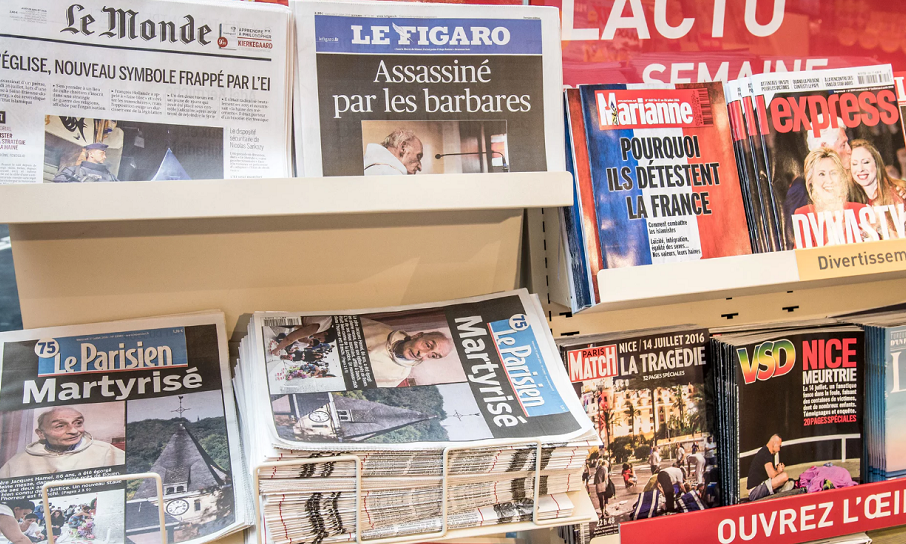 Le Monde and La Croix will no longer use images of terrorist killers, while Europe 1 radio will not broadcast their names.

Several French news organisations have said they will no longer publish photographs of people responsible for terrorist killings, to avoid bestowing “posthumous glorification”.

Le Monde published an editorial after the latest attack, the murder of an elderly priest in a church near Rouen by two men claiming allegiance to Islamic State. Under the headline “Resisting the strategy of hate”, Le Monde argued on Wednesday that all elements of society had to be involved in the struggle against terrorism, and that media organisations had a special role to play.

“The sites and newspapers that produce this information cannot excuse themselves from self-examination on several fronts. Since Isis terrorism first appeared, Le Monde has changed its practices several times,” the newspaper said.

It first chose not to republish images from Isis propaganda documents. Then, after the attack in Nice on 14 July, when a truck drove through crowds enjoying the Bastille Day public holiday, Le Monde said it had decided to “no longer publish photographs of the perpetrators of killings, to avoid the potential effect of posthumous glorification”.

The Guardian view on the Munich killings: a fearful Europe must hold its nerve

Violent attacks in France and now Germany have raised fear levels and the dangers of an anti-migrant backlash. But Europe should remember that it is one of the safest parts of the globe
Read more

The newspaper said it would continually debate other practices in relation to the coverage of terrorism.

The television station BFM-TV and the Catholic newspaper La Croix said they hadchosen the same course of action. “We made the decision last night to no longer show pictures of the terrorists until further notice,” BFM-TV editorial directorHervé Béroud told Agence France-Presse. “We have been thinking about this for some time. Our decision was speeded up by Nice, by the repeated tragedies.”

Europe 1 radio said it would not reproduce photographs of perpetrators of terrorist killings on its website and would not broadcast their names. The France 24 television channel is also expected to announce that it will no longer show the pictures in its broadcasts.

The blackout is not total. Michel Field, the executive director of news at the state-run France Télévisions, issued a statement saying: “Our duty is to inform, it’s the right of citizens to be informed. And we must resist this race towards self-censorship and grand declarations of intention.”

Field said suppressing the names and pictures of terrorists would contribute to the anxiety of the public and the feeling that they were being kept in the dark by the mainstream media, adding that such censorship was ridiculous in the age of social media.

Johan Hufnagel, the editor of the newspaper Libération, said it would take decisions on a case-by-case basis. “We are always challenging our position regarding pictures. Each story is different, each terrorist attack is different and we adapt our front page considering that,” Hufnagel told the Guardian by email.

Don’t underestimate Islamic State. More atrocities are on their way

Le Figaro and Nouvel Observateur have also chosen, for the time being, not to follow Le Monde’s example. British media – the Guardian included – continue to publish photographs of people responsible for acts of terrorism.

In the aftermath of the Nice attack, a psychoanalyst, Fethi Benslama, who teaches at Paris Diderot university, suggested on French radio: “Perhaps it is time that there was a pact in the media to no longer publish the names and pictures of the perpetrators of these acts, as it’s a really big boost to their efforts to make themselves world famous, even while their victims are anonymous and will remain anonymous.”

Benslama said this “glorification” encouraged others to carry out attacks, “to gain glory in the eyes of their commanders and their friends”. He added: “They leave their identity cards – they want to be identified very quickly.”