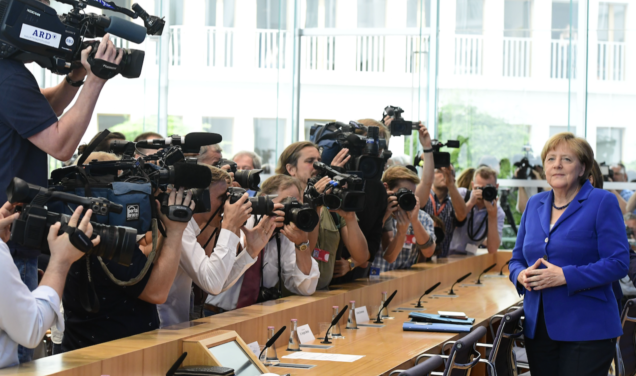 After a week of Islamist attacks by migrants and ‘refugees’, the German Chancellor has admitted terrorists used her open door policy to bring in people to commit violence, but refused to reverse her approach.

Defending her decision to tear up EU asylum rules for Syrian migrants, she said she had “acted in line with my knowledge and conscience” and said Germany would “stick to our principles” and “give shelter to those who deserve it”.

The German Chancellor had rushed back from a holiday and was speaking at a press conference that had been hastily brought forward to address the carnage in her country.

She repeated her “We can do this!” catchphrase, which she first uttered at the same conference last year before welcoming 1.5 million mainly young, male, Middle Eastern migrants to Germany.

“As chancellor, I am responsible for, by far, most decisions. I always have to weigh up if a decision meets our values — which does not mean that there are no risks,” she said.

Adding: “The basic principle that Germany stands by [is that] its humanitarian responsibility is the right thing.”

She did, however, say that “we will have to redouble efforts to deport people” who commit crimes and pledged that weapons laws across Europe would be sharpened.

She also claimed that terrorists wanted Germany to take in fewer migrants, and said she would not bow to their wishes.

“The terrorists want to make us lose sight of what is important to us, break down our cohesion and sense of community as well as inhibiting our way of life, our openness and our willingness take in people who are in need,” she said.

In the past ten days, Germany has been rocked by four violent attacks – three of which were committed by migrants, and two had links to Islamic State.

One Syrian “refugee” hacked a pregnant woman to death on the street. Another Syrian, who came from Bulgaria, blew himself up outside a music festival injuring 15, and a “refugee” attacked multiple people on a train just over a week ago.