Why people are buying Motopeds to survive the apocalypse 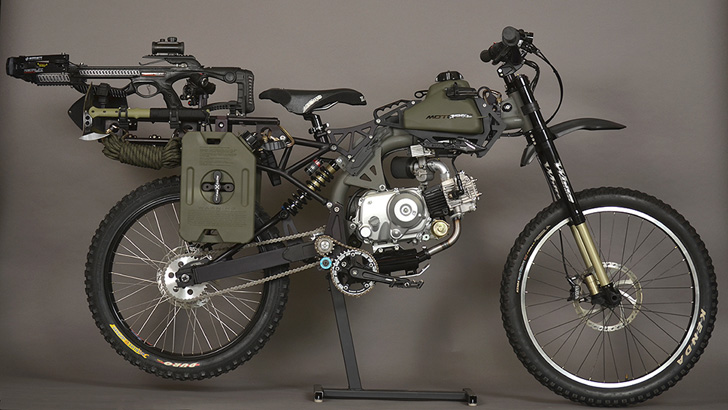 Half bicycle, half motorcycle, the Motoped is the latest vehicle that anyone preparing for an inevitable societal collapse — as well as anyone with an appreciation for fascinating two-wheeled vehicles — will want to look into.

A small-engine vehicle that can be operated both by its gas-powered engine as well as manually via its bicycle-like pedals, the Motoped is an ideal vehicle to have in your arsenal during an apocalyptic event. While it lacks the protection that armored, four-wheeled vehicles provide, the Motoped’s multi-functionality makes it an extremely attractive option for preppers.

But since they can be operated virtually silently — like a bicycle — but also utilized like a motorized vehicle in order to escape from bad situations quickly, Motopeds have many benefits that traditional vehicles lack. After all, there’s nothing particularly stealthy about a massive, gas-guzzling truck.

As nice as the traditional Motopeds are, it’s the Motoped Survival Bike, however, that is sure to send preppers into a frenzy of excitement.

With its dark green and black colors, the vehicle — modeled specifically for apocalyptic scenarios — is stealthy and intimidating. It’s not just aesthetically pleasing, either. Jeffrey Ross of Auto Evolution reports that the Survival Bike “can be equipped with a mount for your iPhone or GPS, a mini LED flashlight and a few multi-tool kits.” Ross goes on to recommend other features such as “the climbing rope with carabiners, tools such as a survival shovel, harpoon and an axe and, yes, there’s even room for a compound crossbow.”

With all of the extra features, the Survival Bike looks like a rugged, durable and intelligent option during a life or death situation. Even if you’re not worried about a societal collapse — and you should at least be prepared for one — the Motoped Survival Bike just looks cool. And that’s a more important aspect when it comes to selecting the proper vehicle than most folks are willing to admit!