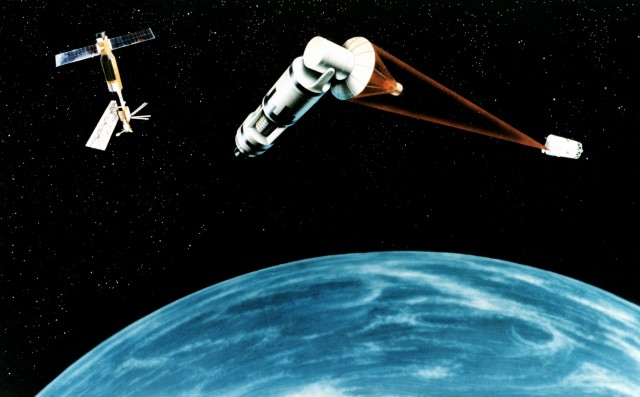 One of the greatest challenges of space travel is to figure out a way to cross long distances in a short amount of time. With directed energy propulsion – a propulsion system that involves using a photon driver to push a spacecraft near light speed – this feet could be bridged.

Directed energy propulsion isn’t exactly a new concept. The idea was played with by a scientist involved in NASA’s Innovative Advanced Concepts (NIAC) program. Philip Lubin, physics professor at the University of California, Santa Barbara, flushed out the concept last year, which was made into a video for the NASA 360 channel.

“We could propel a 100-kilogram (220-pound) robotic craft to Mars in a few days,” Lubin states in the video. “Within about 25 light-years of the Earth there’s actually quite a few potential exoplanets and habitable things to visit – that may be habitable, we don’t know of course. So there are many targets to choose from. The closest is Alpha Centauri, which is about four light-years away.”

In a paper published in the Journal of the British Interplanetary Society (JBIS) in April 2015, Lubin explained the idea in greater detail. He stated researchers could use a slim spacecraft with a small laser sail known as a DE-STAR (Directed Energy System for Targeting of Asteroids and ExplorRation). A laser in Earth orbit would be targeted at the sail and would then accelerate the object to a fraction of the speed of light.

“As an example, on the eventual upper end, a full scale DE-STAR 4 (50-70 GW) will propel a wafer scale spacecraft with a one meter laser sail to about 26 percent the speed of light in about 10 minutes, reach Mars (1 AU [astronomical unit, the Earth-Sun distance]) in 30 minutes, pass Voyager 1 in less than 3 days, pass 1,000 AU in 12 days and reach Alpha Centauri in about 15 years,” Lubin noted.

Better yet, such technology already exists. Directed energy propulsion is well within the reach of current technologies and could potentially be applied to larger spacecrafts. “This technology is NOT science fiction. Things have changed,” Lubin added.

Unfortunately, there aren’t any firms that are currently working on the project, excluding a handful of proposals. Lubin and his team will use funding to sketch a picture of a working spacecraft equipped with controllable photon thrusters. The money will also enable researchers to design ultra-low-mass probes.

To infinity and beyond

The long-term goal is to place a laser in Earth orbit, which would push a spacecraft to greater speeds as it travels away from the planet. Photons have a lot of potential energy, which would convert into a push as they hit the sail of the satellite. This method could propel a 220 pound robotic spacecraft to Mars in just a few days. Some estimates even suggest 30 minutes.

In actuality, this technology would likely be used to propel tiny probes for interstellar travel. “Within about 25 light-years of the Earth, there are actually quite a few potential exoplanets and habitable things to visit,” Lubin said at the NIAC symposium. “There are many targets to choose from,” he added.

Such technology has practical applications in the here and now. For instance, the same laser that is powerful enough to push a satellite to 25 percent the speed of light, could also be used to prevent dangerous asteroids from colliding with Earth.

“Exploring the nearest stars and exoplanets would be a profound voyage for humanity, one whose nonscientific implications would be enormous,” Lubin wrote. “It is time to begin this inevitable journey beyond our home.”