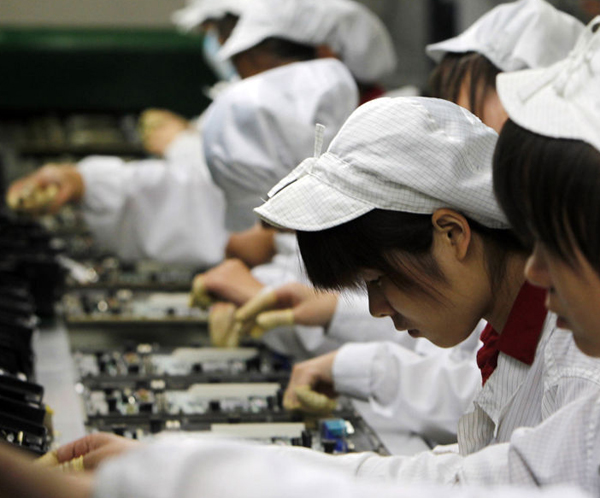 Foxconn Technology Group, a Taiwanese company which produces iPhones and iPads, is the latest major tech business to lay-off several of its employees in favor of robots.

Foxconn has been trying to replace its employees with robots for quite sometime in order to save money and boost profits.

“The Foxconn factory has reduced its employee strength from 110,000 to 50,000, thanks to the introduction of robots,” Xu Yulian, head of publicity for the Kunshan region, told the South China Morning Post. “It has tasted success in reduction of labor costs. More companies are likely to follow suit.”

Dawn of the robots

Foxconn provides electronic devices to major tech companies like Apple and Dell. There is no suggestion that the switch from humans to robots will directly impact production. The company claims the switch will allow employees to take on more complex tasks and is expected to a hold a significant workforce in China, reports the Daily Mail.

In a statement to BBC, Foxconn elaborated on Xu Yulian’s remarks, stating:

“We are applying robotics engineering and other innovative manufacturing technologies to replace repetitive tasks previously done by employees, and through training, also enable our employees to focus on higher value-added elements in the manufacturing process, such as research and development, process control and quality control.

“We will continue to harness automation and manpower in our manufacturing operations, and we expect to maintain our significant workforce in China.”

As many as 600 firms in Kunshan have plans to replace their employees with robots. These job cuts are not good news for Kunshan. The region was home to more than 2.5 million people by the end of 2014, two-thirds of whom were migrant workers.

Factories and other work facilities blanket nearly 46 percent of the land, which is much greater than the cap set by the central government. The local government had to reorganize in wake of the economic boom by promising to stop any more land development and reduce its population by 2020.

Although the number of jobs lost to robots in Foxconn’s factories may seem extreme, the company has a bad reputation with respect to its work environment. Back in 2010, both Apple and Dell launched an investigation into the conditions of Foxconn’s factories in wake of nine worker suicides over the span of a year. Almost all the suicides were committed by jumping from the factory dormitory building.

Foxconn made headlines before regarding an explosion that occurred in a factory in Chengdu in the Sichuan province of China, reports SiliconANGLE. The explosion was attributed to aluminum dust in the air, which is a byproduct of the means used to polish iPhone cases.

During an interview with Fox Business, former McDonald’s US CEO Ed Rensi purported raising the minimum wage to an hour would bring “ job loss like you can’t believe.” He pressed it would be less expensive for businesses to use robots instead of people.