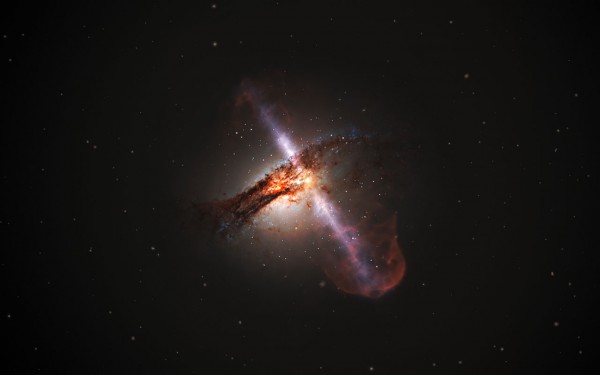 The Star Wars franchise depicted the fictitious “Death Star,” a moon-sized space station capable of firing concentrated beams of radiation across space. Even something as menacing as the Death Star, however, is outmatched by a recently discovered super massive black hole, which is pumping out a stream of particles three times longer than the diameter of the Milky Way.

A new picture released by NASA revealed a “ huge amount of gravitational energy,” in a galaxy known as Pictor A, nearly 500 million light-years from Earth. Astronomers estimate the massive jets of radiation are traveling a distance of 300,000 light-years at nearly the speed of light.

Scientists were able to obtain pictures of the jet by using NASA’s Chandra X-ray Observatory multiple times over 15 years. Chandra’s X-ray data (blue) was integrated with radio data from the Australia Telescope Compact Array (red) to produce the new image.

Why massive black holes are hard to spot

Supermassive black holes do not exhibit light themselves, but they often accrue a disk of illuminated material on the event horizon. The gravity of a black hole sucks in cosmic debris, causing it to heat up and glow. The researchers claim new information from Chandra suggests there are in fact two beams stemming from the black hole; however, one of the streams – the counter jet – is difficult to make out. The counter jet is located on the life side of the picture above. It’s difficult to capture because it is moving away from the Earth’s line of sight.

The jet in the above picture is the one closest to Earth. It churns a steady stream of X-ray emissions, stretching a distance of 300,000 light-years. To put this into perspective, the Milky Way is 100,000 light-years in diameter. Since Chandra is able to take detailed X-ray images and the jet is relatively close, scientists can look at the specifics of the picture to understanding how the X-ray emission is produced.

According to the scientists, the emission of X-ray particles is most likely due to electrons swirling around magnetic field lines during a process known as synchrotron emission. It’s not completely known why this occurs, but the astronomers suspect the electrons must be re-accelerated as they travel along the jet.

The team ruled out alternative mechanisms that may be producing the X-ray emission. According to one hypothesis, as electrons move away from the black hole and into the jet near light speed, they collide with the cosmic background radiation (CMB) left over from the Big Bang. Whenever an electron collides with a CMB photon, its increases the photon’s energy up into the X-ray band.

The luminosity of the jet is contingent on the power of the stream of electrons and the intensity of the CMB. The brightness of the X-rays stemming from the jet and counter jet do not produce what would be expected if CMB was involved.

At any rate, pictures of the jet stream promted Star Wars enthusiasts to compare the supermassive black hole to the Death Star. “The Universe, however, produces phenomena that often surpass what science fiction can conjure,” reads the Chandra web site.