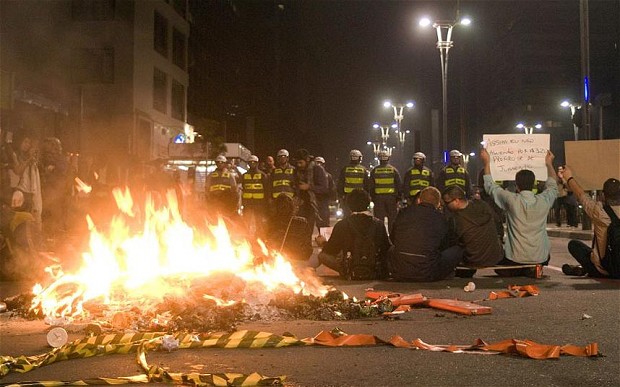 This video was produced by Melissa Dykes and originally published atTruthstreamMedia.com.

Editor’s Comment: The sordid history of U.S.-sponsored regime change is a sad note in history, but a lesson that needs to be learned.

There are forces at work to destroy the United States from within – Obama, Hillary and Soros are but a few prime examples. The barbarians are at the gate, and the age-old formula of divide and conquer is changing America. With astroturf support, they set out to undo the constitution and take the country over as a collective from within.

Could it happen here? The better question is: how long do we have left?

A History Of Manufactured Regime Change And Civil Unrest: Is America Next?

“These revolutions are portrayed in the western media as popular democratic revolutions, in which the people of these respective nations demand democratic accountability and governance from their despotic leaders and archaic political systems.”

“However, the reality is far from what this utopian imagery suggests. Western NGOs and media heavily finance and organize opposition groups and protest movements, and in the midst of an election, create a public perception of vote fraud in order to mobilize the mass protest movements to demand ‘their’ candidate be put into power”

“It just so happens that “their” candidate is always the Western US-favoured candidate, whose campaign is often heavily financed by Washington; and who proposes US-friendly policies and neoliberal economic conditions.”

“In the end, it is the people who lose out, as their genuine hope for change and accountability is denied by the influence the US wields over their political leaders.”

— Via Global Research, “Color-Coded Revolutions and the Origins of World War III”

This video was produced by Melissa Dykes and originally published at TruthstreamMedia. Subscribe to the Truthstream YouTube channel here.