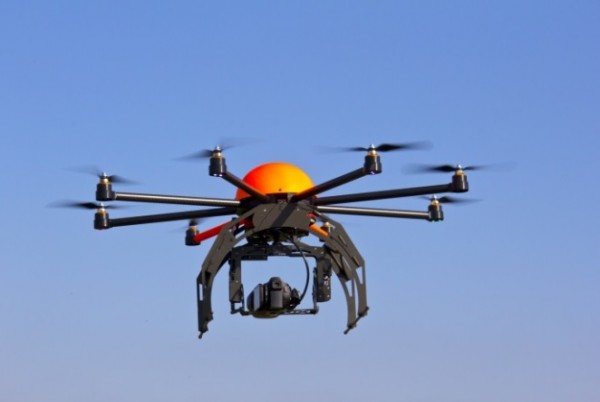 If glyphosate wasn’t scary enough for you, Monsanto’s newest idea will surely have your hair standing on end. The agri-business giant has come up with a pesticide drone – because drones and pesticides are two things that clearly belong together. Dumping herbicides and pesticides from the sky seems like something the government should oppose, but instead, somehow the corporate giant has won federal approval for this monstrous development.

The helicopters, which have been designed by Yamaha Corp. U.S.A.,  are incredibly lightweight and don’t require human pilots. In 2015, the federal government announced their approval for the autonomous helicopters to be used by farmers to spray fertilizers and pesticides. Rice farmers in Japan have already begun using the drones for this very purpose – though that does not exactly inspire confidence.

Supposedly, the drones are best used for precision spraying on hilly terrain and tough-to-reach areas. While this does kind of make sense, the real problem here is that the government is allowing people to spray pesticides from unmanned helicopters. Understandably, officials were “initially hesitant,” but ended up granting a Section 333 exemption for the new civilian drone. Steve Markofski, a spokesman for Yamaha Corp. U.S.A., told the Associated Press, “I certainly understand their cautious approach. It’s a daunting task given our airspace is complicated.”

There are many reasons why these “drone-copters,” if you will, should be approached with caution – or better yet, avoided all together. But apparently matters of national health and security are of very little importance to the FAA. Sadly, this is not really surprising coming from a federal agency.

First of all, these drones will make it easier than ever for farmers to douse their crops – and the surrounding areas – in glyphosate or other toxic chemicals. When you spray these pesticides into the air, especially from above in a drone, you are not just spraying the target; the toxic mist will spread into the air. There is no telling how far exactly these toxic particles can spread, but suffice it to say they can contaminate their surroundings easily.

A report by the Swedish University of Agricultural Sciences revealed that around 5 percent of the pesticides sprayed on crops will drift to other areas; this is more than enough to be harmful to the surrounding environment. Pesticides are already found in rivers, groundwater and even fresh rain. The risks of unwanted pesticide spread into our air, water and soil are already hard enough to control – what will happen when farmers can spray pesticides and herbicides from a flying, unmanned drone at will?

And furthermore, what is going to happen when that drone is eventually hacked? Chinese hackers have already hacked into U.S. airlines. Don’t you think airline computer systems are a little more secure than Farmer Joe’s pesticide drone-copter? Do we really want these drones to end up spraying people with these pesticides instead of plants? Because that is probably going to happen.