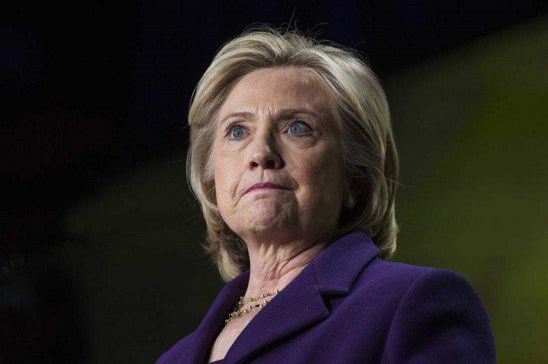 The nation is a proverbial derriere hair away from the deluded, twisted, hell on earth world of a Hillary Clinton Presidency.

Make no mistake about it. Hillary Clinton isn’t just another Democrat, a political rival of Republicans. She is a lying criminal who exhibits sociopathic traits. Hillary Clinton is a dangerous, reckless narcissist who believes the world owes her the Presidency and who bows to globalist policies and operatives like the demonic, George Soros.

Let us hope that the nightmare scenario below never develops:

Donald Trump rallies in the polls the last 75 days of the election. He and Hillary Clinton are neck and neck by Election Day. The Clinton campaign conducts widespread voting fraud and is able to secure victory on the night of November 8th. Trump files numerous lawsuits, but they are stalled in federal courts and will never see the light of day.

President Hillary Clinton’s first act as President is to turn the Clinton Foundation back on. Instead of shutting its doors, it is running at full speed, turning the Oval Office into a casino for pay to play schemes, where the house always wins and the dealer is Bill Clinton.

You can’t have the Clinton Foundation without a couple private, non-secure servers. This time the servers are set up in the bathroom stall of a Fairfax, Virginia, Starbucks.

President Hillary Clinton chooses a radical, left wing socialist judge to replace Judge Scalia on the Supreme Court. With a combination of executive orders, a Democratic run Congress and the Supreme Court tilted toward the left, the Second Amendment is eviscerated in a matter of weeks. Universal gun control is now the law of the land, a law that many Americans on the right refuse to obey. A pro-gun resistance group called 1776 gains popularity and begins to push back against the gun control laws. Pockets of patriot resistance begin to dot the land from Maine to Alaska.

The stock market continues to be nothing more than a chimera, representing only the speculative trades of too big to fail investment banks, while the hopes and dreams of the average American are crushed under the weight of globalist economic policies that outsource American jobs and companies.

Jorge Ramos is chosen as the first Secretary of Open Borders, becoming the man who throws away the key to America’s national security, subsequently allowing tens of millions of undocumented Hispanics and Muslims into the country.

Obama Care rolls along with its obscene premiums and lousy health care companies. Any reputable health insurance companies are long gone from this government monstrosity. It is a horrendously expensive train wreck, a gigantic facade that offers insurance for all and provides for none.

Across the land, veterans continue to wait for treatment and die. All calls for privatizing the VA are laughed at and silenced. The VA hospitals become more corrupt and inefficient, sucking millions out of the government that line the pockets of criminally inept VA officials.

Blackmailed for years by the Chinese and Russians, Hillary Clinton operates at the whim and fancy of President Xi and Putin. They have her by the proverbial long johns. She inadvertently becomes the first communist agent to sit in the White House since Harry Hopkins.

FBI Counter-Intelligence has damning evidence that Huma Abedin is a Saudi Intelligence officer, who has been passing on top secret information to the Saudis for years, while posing as Mrs. Clinton’s faithful all around gopher. The evidenceand the investigation disappear like Vince Foster and his files at the National Archives.

Obama’s disastrous Iran Nuclear Deal marches on. Iran continues to finance terrorism across the world, taking more US hostages and harassing a severely weakened US Navy in the Persian Gulf.

ISIS goes on a rampage across the world, knowing there is no one to stop them. Bombs explode from Berlin to London to Miami. Meanwhile, President Hillary Clinton still refuses to say the words, “Radical Islamic Terrorism.”

The feminist destruction of the military is now a done deal. The US military looks great on a power point presentation, but in actuality is a feckless paper tiger and simply incapable of winning any wars. A Berkeley professor and four star female Coast Guard Reserve admiral becomes the Chairwoman of the Joint Chiefs of Staff.

Common Core continues unabated, educating no one, frustrating teachers and costing the US government millions in wasted funds.

Breitbart, Drudge and Infowars are shut down by the government under falsecharges of tax evasion and inciting hate and violence. Matt Drudge, Alex Jones and Stephen Bannon sit in federal prison, awaiting trial.

President Hillary Clinton’s health becomes more of a mystery. Rumors seep out of the White House about her seizures, bed wetting, dementia and violent outbursts. President Hillary Clinton has not conducted a press conference for 708 days. She does call Anderson Cooper regularly from her Oval Office couch though, and conducts weekly fireside chats by Skype audio to a perplexed nation.

This country is at a tipping point. There has simply been no election in recent history that is as important as the current one. If Hillary Clinton is elected, it will be a victory for the globalist criminals that fund her campaign, direct her every action and more importantly, who seek to bring America to its knees, by weakening our economy, our national security, our family structure, our churches, our military and our way of life.