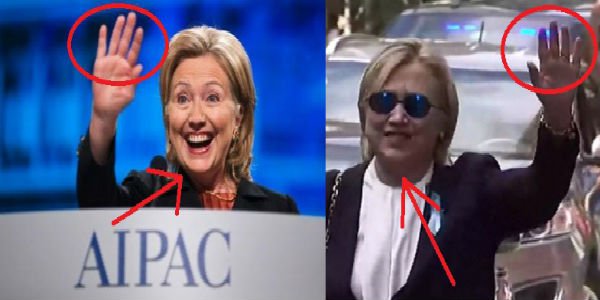 Today has been a huge day in the world of politics. While both candidates attended events this morning to commemorate the brave Americans that died 15 years ago, only one ended up staying.

We already know from campaign managers that Hillary was diagnosed with pneumonia on Friday. That’s quite a leap from the same people who told us that she was “just fine” days ago.

And then hours ago we all witnessed the video that went viral on Twitter and YouTube. It shows Hillary completely collapsing. She was then promptly carried the last few meters to her vehicle. During this episode though, a metal pin or something similar fell from her pant leg.

Things are now getting even fishier. Hillary shows up in front of cameras just minutes after her “episode” at the memorial. She is seen walking about and even hugged a small child before declaring to everyone around her that she “felt fine” and was enjoying the “beautiful day.”

But, is it really Hillary? Making things up to dampen a political candidate is one thing, but comparing pictures, it looks quite clear that it is a different person.

While this might be startling by itself, one must consider the full implications of what is going on. If they are willing to use a stunt double to present a façade that Hillary is healthy, how much farther will they go? This is a clear attempt at manipulating the American people into believing that Hillary is fit.

And, if she is too weak to stand on her own, how will she have the strength to stand under pressure against the challenges that America is sure to face in the next four years?

Radical Democrats have been quick to dub this as a “Conservative conspiracy theory.” It shows truly how far gone they are. When they aren’t even willing to take a look at the information being presented, something is seriously off. This country was built on freedom of the press and the exchange of information; the fact that they speak against this shows their true intentions.

Do not be fooled. The American people are now fully aware of the situation. What’s even more important though, is that you understand the severity of the situation. We can all look around and realize that something’s off. However, this isn’t like anything we have ever witnessed before.

Whether we take a look at Watergate, or the scandal that had Bill Clinton removed, we have never seen corruption on this level. Media corporations are literally working hand-in-hand with the government to throne a new puppet, and this time they want Hillary.

Join the fight. All the people who said we couldn’t make a difference have already been proven wrong. United, we have the power to affect real political change. This is a modern world though, and in today’s age our power comes from working together on the web. Share this article and further our efforts to spread how truly corrupt the current establishment. There are less than two months left before the final showdown; we will continue to fight them on every front.

This country will be great again. The American People will not be deceived. United, we stand and fight.