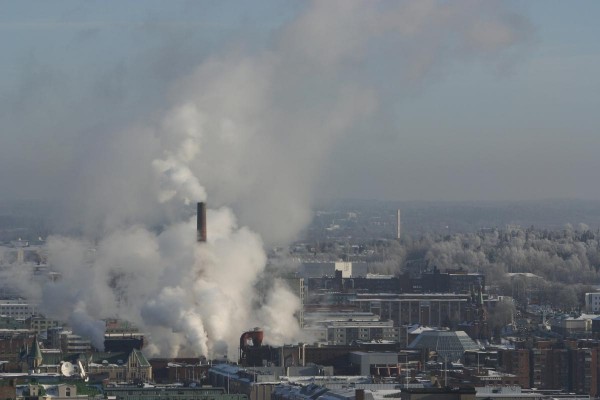 The clothing industry is one of the biggest polluters in the world, next only to Big Oil. Fashions change with the seasons, and often the in-vogue pieces of the moment last only that long—a moment. What this leads to is a revolving door of fabrics, dyes, textures, patterns and materials. Not only is the environment polluted, but also many foods grown in these environments. When you read the label of your shirt or dress, what does it read? Made in Bangladesh? Made in Thailand?

In 2013, the Rana Plaza in Bangladesh, a factory that produced cheap clothing for the West, collapsed and killed over 1,100 Bangladeshi workers, while injuring thousands others. Brands that ran factories within the Rana Plaza included the Gap, J.C. Penney, Walmart and The Children’s Place. Of course, we all need clothes. There’s no getting around that. Yet, the desire to have clothes simply to prove that one is trendy or in-the-know about current styles leads to a type of consumerism that can often be traced back to pitiful working conditions like those suffered by underpaid and abused workers of the Dante-esque scenarios in the Rana Plaza.

And now there is more evidence to show that fashion is not only killing and abusing the most vulnerable people on the planet but is also poisoning and polluting our world, as well. Here are just a few shocking statistics that demonstrate how much of an impact producing clothing can have:

In 2010, China’s textile industry processed 41.3 million tons of fiber and accounted for 52-54 percent of the world’s total production.

Millions of tons of unused fabric at Chinese mills go to waste each year when dyed the wrong color.

The Chinese textile industry, which produces about half the clothing Americans buy, creates about 3 billion tons of soot each year.

It takes 15 to 17 gallons of water to dye each individual clothing product.

Textile dyeing is the No. 2 polluter of clean water on earth, following agriculture.

To see the real impact of the pollution created by the demands of the clothing industry just do a search on the internet for the Citarum River in Indonesia. The Telegraph discussed the impact of the textile dyeing industries on Java’s Citarum River in 2014, “Over 200 textile factories line the river banks. The dyes and chemicals used in the industrial process — lead, arsenic and mercury amongst them — are churned into the water, changing its color and lending the area an acrid odor.”

Perhaps it is time for consumers to make the switch to eco-friendly brands, or, better yet, would it be so unreasonable for people to consider the idea of “slow fashion”? As Hazel Clark, research chair of fashion at Parsons noted, slow fashion focuses aggressively on the problem of consumerism, in addition to the issue of environmentally friendly production processes: The problem with something like green fashion [or other movements] is that it’s still very much focused on the item’s consumption, whereas slow fashion addresses the whole cycle.

Throw-away or disposable fashion, as it is often called, cannot continue forever because—quite simply—water is being wasted on frivolous objects and it is damaging precious resources. As Jacqueline Jackson points out in Assessing the Environmental Impact of the Fashion World: “The world’s resources cannot keep up with our increasing demand for throw-away fashion. Cotton, for example, a key input to the apparel industry, is responsible for 2.6 per cent of the global water use. However, a gap already exists between water supply and demand. If we do nothing to correct this imbalance, by 2030 demand for water will exceed supply by 40%.

Continuing down this path may eventually lead us to the dilemma of the Ancient Mariner, with water, water, every where, nor any drop to drink.