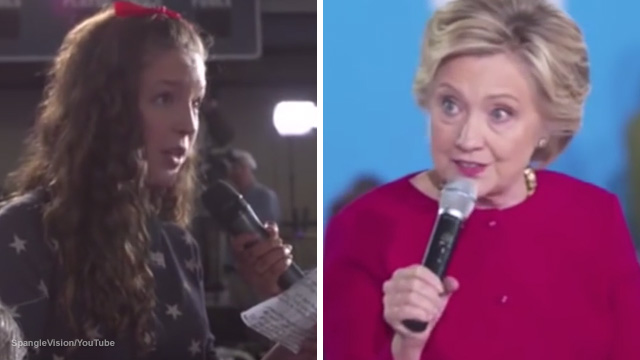 (NaturalNews) Is anyone surprised anymore to learn that everything is rigged with the Clinton campaign? Today we learn that the widely touted “15 year old girl” who we were told was “chosen at random” to ask Hillary Clinton a question was actually a child actor and daughter of Pennsylvania State Senator Daylin Leach.

Watch the video, below, that nails the discovery of this child actor in a Hillary Clinton town hall meeting:

“Hi Madam Secretary. I’m Brennan and I’m 15 years old. At my school, body image is a really big issue for girls my age. I see with my own eyes the damage Donald Trump does when he talks about women and how they look. As the first female president how would you undo some of that damage and help girls understand that they’re so much more than just what they look like?”

“I’m so proud of you for asking that question. You are right — my opponent has just taken this concern to a new level of difficulty and meanness. And, it’s shocking when women are called names and judged solely on the basis of physical attributes. My opponent insulted Miss Universe. I mean, how do you get more acclaimed than that? But, it wasn’t good enough. So we can’t take any of this seriously any more. We need to laugh at it. We need to refute it. We need to ignore it. And we need to stand up to it.”

As Zero Hedge reports, the entire mainstream media pushed this story into a top tier news meme of the day:

In fact, pretty much everyone covered the story including The Washington Post, New York Magazine, The Chicago Tribune, Cosmopolitan…it’s pretty hard to find a media outlet that didn’t cover it actually.

25 more things that are rigged about Hillary Clinton, the DNC, the media, Obama and the election

1) All debates are rigged to favor Hillary.

2) All debate QUESTIONS are given to Hillary in advance.

3) All debate MODERATORS are in the pocket of Hillary and the DNC.

5) All polls are rigged to include a ridiculously high number of democrats in order to make Trump look like he’s losing the popular vote.

6) All media coverage is 100% rigged to celebrate Hillary (and skip over her many crimes) while smearing Trump and framing him as a criminal because he lost a lot of money in 1995 (which he then earned back in subsequent years in an astonishing comeback victory).

8) The entire DNC nomination of Hillary was 100% rigged from the start to dismiss Bernie Sanders. Theater!

9) All economic numbers released by the White House are rigged. “Job growth” figures only exist in the delusional minds of the democrats.

11) The entire stock market is rigged by the banksters and no longer functions like a “market” at all.

12) The money supply is completely rigged by the Central Banks, who are drowning the world in dangerous debt.

13) Gold and silver prices are routinely rigged to keep them suppressed (and America’s claimed gold deposits are also rigged and falsified).

14) Hillary Clinton’s podium is rigged with special electronic receivers so that democrat operatives can feed her scripted lines during debates (search GoodGopher.com for “Podiumgate” at this link.

15) The Alicia Machado hit piece on Trump was 100% rigged, scripted and rolled out with absolute precision by the leftist media to falsely portray Trump as a woman hater. (Meanwhile, Bill Clinton keeps “dicking bimbos” while Hillary destroys the victims.)

16) The silencing of Bill Clinton’s rape accusers is also controlled and rigged to make sure no rape accuser is ever given air time in the mainstream media. This isn’t the Bill Cosby story, you see, it’s the Bill Clinton story. And the Clintons have lifetime “get out of jail free” cards that they use daily.

17) Obama’s IRS is rigged to punish and criminalize conservative non-profits.

18) Hillary’s debate performance is rigged with chemical cognitive enhancers to keep her “aware” during the debates. Nothing like a little SPEED to keep you alert, is there?

19) All debate broadcast schedules are rigged to minimize the viewing audience and intentionally interfere with other popular events (like Monday Night Football, which has also become a total theater of political correctness, by the way).

20) Most highly publicized “mass shootings” are enhanced, too, using — guess what? — professional actors just like Hillary uses in her town hall meetings! These are often the “grieving parents” who are filmed by CNN… they’re often just paid actors.

21) Most “mass shooting” numbers are completely rigged, too, and are really little more than gang bangers shooting each other in groups of 2 or 3. To the anti-gun left, a “mass shooting” is any time more than one gang banger is shot dead by another gang banger. (Because Black Lives don’t really matter to the black politicians running gun-controlled Chicago, do they?)

22) Hillary’s charges of sexism, racism, xenophobia and Islamaphobia are all contrived and borne out of nothing but mindless name calling and political desperation. The democrat playbook is no longer working as intended, however. The public is onto the scam…

23) The entire perception of the Obama administration has been rigged from the start with Obama spending $500 million a year to hire 667 PR staffers (yeah, it was almost 666) to spin tall tales in the media about the “success” of Obamacare.

24) Speaking of Obamacare, the entire system is rigged and collapsing. As of today, 17 of the nation’s 23 Obamacare co-ops have already collapsed.

25) The voting of illegal aliens is also rigged by the democrats, allowing as many illegals as possible to vote in national elections without any ID.

I could keep going… there are hundreds of things that are rigged in this election, and they’re all rigged to favor Hillary and destroy Trump.

What’s the solution to all this? VOTE FOR TRUMP on November 8th

End the Clinton nightmare for America.
Protect the Second Amendment and your right to self-defense.
Restore fiscal sanity to our nation… and restore the rule of law!
Indict, prosecute and imprison the Clintons and all the democrat operatives who committed a long list of crimes against America (money laundering, voter fraud, corruption and even murder).
Stay informed at Trump.news