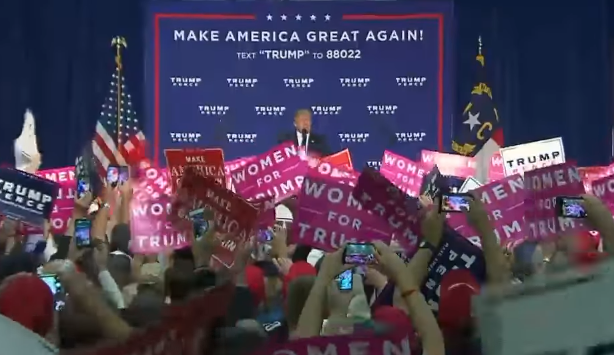 Donald Trump responded to a recent revelation from WikiLeaks that Hillary Clinton planned to speak at the Clinton Global Initiative’s 2015 meeting in Morocco on the condition of a $12 million dollar donation, again accusing the former secretary of state of pay for play scheme between the Department of State and the Clinton Foundation.

“More pay for play,” Trump alleged during a campaign rally in Fletcher, North Carolina, where he currently trails Clinton by an average of 2.5 points.

The WikiLeaks reveal comes from Clinton’s campaign chair John Podesta’s hacked emails between him and her top aide Huma Abedin.

“Abedin wrote that ‘this was HRC’s idea’ for her to speak at a meeting of the Clinton Global Initiative in Morocco in May 2015 as an explicit condition for the $12 million commitment from the king,” Fox News’s Ed Henry reports.

“No matter what happens, she will be in Morocco hosting CGI on May 5-7, 2015. Her presence was a condition for the Moroccans to proceed so there is no going back on this,” Abedin stated in the 2014 email.

As Breitbart News’s Frances Martel writes, “In a subsequent email, Abedin explained that the King of Morroco had invested millions in the meeting on the condition that Hillary Clinton would attend.”

“Just to give you some context, the condition upon which the Moroccans agreed to host the meeting was her participation. If hrc was not part if it, meeting was a non-starter. CGI also wasn’t pushing for a meeting in Morocco and it wasn’t their first choice. This was HRC’s idea, our office approached the Moroccans and they 100 percent believe they are doing this at her request. The King has personally committed approx $12 million both for the endowment and to support the meeting. It will break a lot of china to back out now when we had so many opportunities to do it in the past few months.

She created this mess and she knows it.”

Trump repeated his proposal of ethics reforms to “drain the swamp in Washington, D.C.”

“Hillary Clinton is the most corrupt politician ever to seek the office of the presidency,” Trump told the crowd, which responded by chanting “Lock her up.”