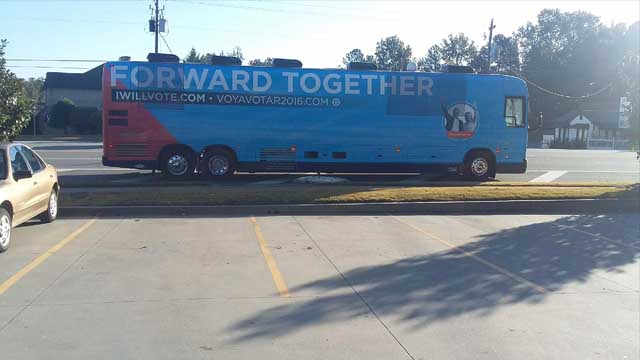 Recently, a Democratic National Committee campaign bus was seen performing an act that some might be quick to call a literal translation of how the DNC figuratively handles its business. No, this isn’t a National Lampoon movie, nor was Randy Quaid having a morning beer in a slightly undersized bathrobe while Frosty the Snowman played in the background on a tuba. This was far too real and far more dangerous than a fictional slapstick family comedy.

Police in Lawrenceville, Georgia responded to multiple reports of the DNC “Forward Together” campaign bus spewing forth toxic human sewage into a storm drain. The incident was witnessed by numerous local citizens, some who decided to take pictures of the event. According to those witnesses, the chartered vehicle for the campaign pulled up in front of O’Reilly Auto Parts on Grayson Highway in Gwinnett County. An employee from the store then watched, dumfounded, as someone exited the vehicle and opened the sewage drain. Human excrement then began to flow freely out onto the street and into the storm drain. A local businessman who also took photos of the incident was quoted as saying, “I don’t care who you are, whether you’re Hillary Clinton or Donald Trump, you don’t dump human waste down a storm drain. It’s just wrong.”

Upon arriving at the scene, local police were greeted with a horrible stench and drying toilet paper. The entire incident only lasted about 5 minutes, but it was enough to make a lasting impact on voters in an area where Clinton leads Trump by 4 points. Soon after, the fire department deployed a hazmat team to the scene to deal with the clean up procedure.

The DNC was quick to respond to the negative publicity, stating that they had no idea that anything had happened and that they were taking corrective action against the charter bus company in order to prevent any further incidents. They also announced that they were working with the Georgia Department of Natural Resources in conjunction with local and state officials in order to find a resolution to the matter.

In a year that has been dominated by bad press for the DNC, this seems to be just another last minute hurdle. In an odd and rather humorous twist, this is the only DNC leak this year that the Clinton campaign can’t attribute to hackers or try to blame on the Russians.