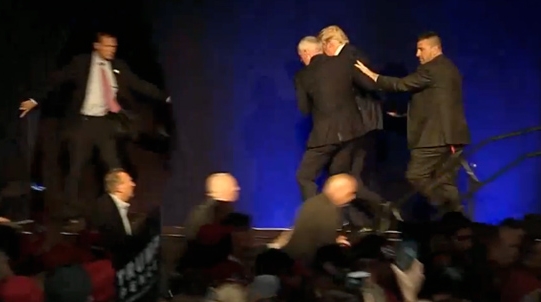 Update: Although many in the crowd were told there was a gun, it has now been reported that no weapon has been found.

At a Trump rally this evening in Reno, Nevada secret service agents were forced to rush Donald Trump off stage after a man with a gun was deemed to be a threat to the Republican presidential candidate. Afterwards, a police SWAT team apprehended the suspect. The situation apparentely began after someone was seen flashing a gun before being retrained just feet away from the candidate.

Trump later returned to the rally to address the situation and thank the security service.

As reported by Express, “He walked back to the podium, staring across the crowd as people cheered his return. As he stepped back to the microphone he said: ‘No one was saying it would be easy for us.’

He went on to pay credit to the security services, saying that they ‘don’t get enough credit’.”

From the recent news of an upcoming terror attack by Al Qaeda to this possible assassination attempt on Donald Trump, it seems like many in the new media have been proven right when it comes to their previous predictions. Donald Trump’s opponent, Hillary Clinton, has a long history of corruption and many believe that she — and the establishment that supports her — will stop at nothing to make sure she is the next President of the United States.

The establishment is realizing that Trump could win

As the final days of the election draw near, it is obvious that Clinton’s campaign is in trouble due to the gains Trump has made in many battleground states. This would understandably come as a major threat to Clinton and the establishment. Powerful Clinton supporter George Soros recently claimed that the election was over and that Hillary would win. A Clinton victory seems less likely each day — especially after the reaction voters had to FBI director Comey recently informing Congress that Hillary’s email investigation has been reopened.

Although InfoWars and other new media outlets have been calling this a blatant assassination attempt, other news outlets are playing the recent situation down, claiming that it was not an assassin — but a protester. This can be seen in a Daily Mail headline that reads, “[A] protester rushes the podium and is tackled to the ground in the crowd.”

Whether this was an assassination attempt or not, it is important to note that this incident and others have been predicted — and have since come to fruition — with a high level of accuracy by the new media.