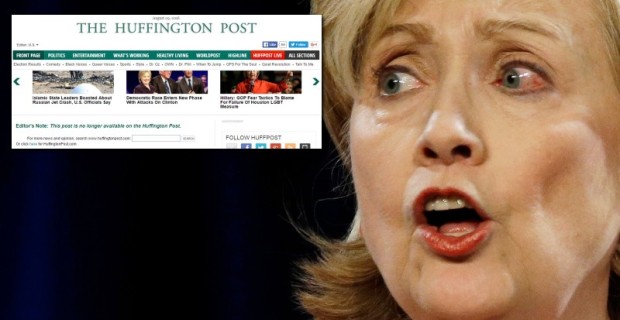 If you have suspected that the establishment media was in the tank for Democratic presidential nominee Hillary Clinton, a newly-released email from WikiLeaks should put any lingering doubts you had aside.

As noted by Zero Hedge, consider The Huffington Post in that category.

A few months back the site noted that HuffPo contributor David Seaman had his publishing rights revoked after he dared to mention the obvious: That something could be physically wrong with Clinton, considering all of the times she has fallen, had to have help walking up a flight of stairs, fainting, etc.

What was really ironic is that Seaman was kicked off the site Aug. 30, less than two weeks before Clinton collapses at the 9/11 memorial service in New York City – which basically confirmed every “conspiracy theory” that Seamen mentioned in his piece.

That episode was an obvious example of how the biased establishment media works to protect Democratic presidential nominees, no matter how flawed, incapable or unfit they may be for the office.

So, that made it pretty obvious that HuffPo was all-in for Clinton. But a hacked email from the latest WikiLeaks dump of Hillary advisor John Podesta’s emails exposes fully the blatant collusion in black and white.

A chain of email shows that, when asked whether she should join the board of a pro-Democrat media consortium, PMUSA, Ariana Huffington, the site’s founder, graciously declined, saying that she could be much more useful to the Clinton campaign by merely pushing its agenda via HuffPo and “without any perceived conflicts…”

Meaning, without bothering to fact-check or verify anything. Just a straight campaign-to-HuffPo publication line.

In fact, as the email states plainly, “She is enthusiastic about the project but asks if she’s more useful to us not being on the Board and, instead, using HuffPo to echo our message without any perceived conflicts. She has a point.”

That’s pretty blatant. But then, anyone who seriously still considered the Huffington Post an unbiased purveyor of the news is not paying attention.

Of course, HuffPo isn’t the only establishment media outlet that has sold its soul to Clinton. Just about every legacy media outlet, including newspapers, cable TV news, and political news websites ,are all in for Hillary…regardless of her lack of accomplishment, her endangerment of national security, her bizarre behavior and her selling of access to the highest (foreign) bidder.

So you can draw this conclusion from all of that support: Our establishment media wants America to fail and to lose its place of dominance in the world. That’s the only reason why they could support a corrupt, crooked nominee like Hillary Clinton.