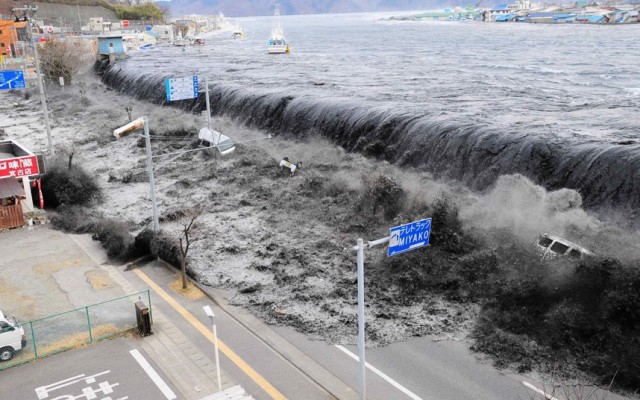 The U.S. Geological Survey announced Monday that it had detected a large 7.3 magnitude quake off Japan, with the epicenter near the already quake-damaged Tokyo Electric Power Company nuclear facility in Fukushima.

Officials in Japan were warning residents along the country’s northern coastal regions to evacuate as quickly as possible, adding that a quake-produced tsunami as large as 10 feet high could smash into the northeast.

As of this writing, Japanese officials said that TEPCO officials were checking nuclear facilities to assess any damage.

As reported by the UK’s Telegraph, earthquakes are common in Japan, which is one of the world’s most active seismic areas. Japan accounts for about 1 in 5 of the world’s earthquakes, or around 20 percent, of a magnitude 6 or greater.

The March 11, 2011 quake that heavily damaged the TEPCO facility at Fukushima was a magnitude 9 quake, the strongest on record for Japan. It triggered a massive tsunami which caused the world’s worst nuclear crisis since the disastrous meltdown at Chernobyl, in the former Soviet Union, 25 years ago.

The USGS initially said the quake measured 7.3 but the agency later reduced that to 6.9.

All nuclear plants along the coastline of Japan are threatened by a potential tsunami, but they were all shut down after the 2011 quake damaged the plant at Fukushima. Today, only two reactors are operating in Japan, and both are located in the southwest of the country.

Still, even when they are shut down, nuclear plants need cooling systems to operate to keep spent fuel rods cool.

Here are the developments thus far:

— In the immediate aftermath of the quake, officials began checking the Fukushima plant for any new damage.

— Ships in harbor began to move out to see, in anticipation of a 10-foot tsunami.

— During the quake, buildings as far away as Tokyo – 200 miles to the south – swayed.

— As reported by Natural News, the #3 plant at Fukushima has suffered a FAILED cooling system, according to NHK World TV Live. Some 2,544 fuel rods are stored there.

“The Fukushima-Daiichi nuclear power facility has remained extremely vulnerable to a collapse of its remaining nuclear fuel rod pools, which were damaged in the 2013 tsunami that led to a nuclear facility meltdown,” Natural News reported. “Since that time, the nuclear fuel rod pools have still not been repaired. The fuel rods remain a grave risk to humanity, as a “criticality event” could release enormous clouds of radioactive material that circle the Northern Hemisphere, dropping radioactive elements such as Cesium-137 onto North America.”