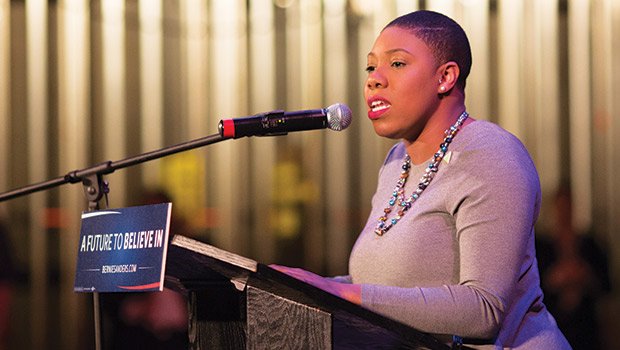 (Freedom.news) Throughout the recent election cycle and beyond Americans have been treated to a steady diet of “Trump and his supporters are RACISTS!” It wasn’t true then and it isn’t true now.

Pledging to enforce immigration laws is not an act of racism, it’s what responsible presidents do. And when Trump made several attempts to reach out to minority communities, he was bitch-slapped him for even making an effort (that would be you, African-American leaders). So you could make an argument that most blacks simply do no want to “reconcile” with Trump, or any white leader for that matter.

Too strong of a claim, you say? We will respond with one name: Symone Sanders.

You may remember she was the African-American spokesman for the Sen. Bernie Sanders campaign. She had this to say recently on CNN (of course) about who should now lead the Democratic Party:

Howard Dean, you know, Howard Dean was there for the 50-state strategy, but here’s the issue: Howard Dean is also on record maligning young people and millennials. Telling those Bernie folks they just need to get in line and maligning Bernie Sanders. And that is not what we need. And in my opinion we don’t need white people leading the Democratic party right now. The Democratic party is diverse, and it should be reflected as so in leadership and throughout the staff, at the highest levels. From the vice chairs to the secretaries all the way down to the people working in the offices at the DNC. I think we need a robust discussion about this and I think we need to hear more from all the candidates. Jaime Harrison of South Carolina, he’s great, too. He’s done real party building, but everybody doesn’t necessarily know Jaime and they want to know what he stands for. So I want to hear more from everybody. I want to hear from the millennials and the brown folks.

There you have it, in just about as plain of language as you can get.

That Democrats allow one of their own to say something like this publicly – no one from the party has stepped up to criticize Sanders – is bad enough. But the underlying truth is, Democrats of all stripes think this way because theirs is a “divide and conquer” strategy. The party’s leaders have decided that the best way to “win” is to assemble a coalition of people who they have identified as “victims” of a racist, bigoted, homophobic and white America – even though this strategy continues to lose Democrats elections all around the country, save for the deepest of deep blue regions.

But Sanders’ comments and her party’s refusal to chastise them prove beyond any doubt that hers is the party of true racism.

As to her claim that “the Democratic Party is diverse,” we would simply point out another obvious fact: During the presidential race the Democratic Party offered up three older white people as their potential standard-bearer; the vast 17-candidate Republican field included whites, men, a woman, Latinos and an African-American. Who’s “diverse?”

Symone Sanders ought to be ashamed of her racist statements. People like her are what is wrong with our political and societal discourse today, and why it is so bitter and shrill. And it’s the Democratic Party that is creating this division, not the Republican Party.