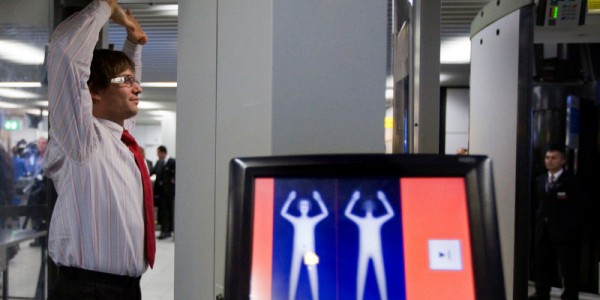 The worst thing to come out of the USA Patriot Act passed in the aftermath of the 9/11 attacks. Other than the massive unconstitutional domestic surveillance that the law “authorized” was the creation of the Transportation Security Administration (TSA). Under the guise of “making it safe to fly,” TSA agents have been trained and empowered to conduct nasty, invasive, and in any other setting, criminal, pat-downs and body searches that accomplish little, except to worsen the travel experience.

As noted by The Daily Sheeple, in recent days, Denise Albert, co-host of The MOMS with Denise and Melissa, took to Facebook to describe the latest humiliation inflicted on an American traveler by TSA agents. Albert, who is undergoing treatment for breast cancer, was traveling through the Los Angeles International Airport when she was all but undressed publicly, for all to see, and for no good reason.

“I have never been so humiliated or felt more violated in my life,” she wrote.

‘I don’t know what was different this time’

Albert said she went through a scanning machine without incident after telling agent-thugs about her metal port (for cancer treatment) and medical cream, which she said she removed from her carry-on bag so they could see it and test it, like she had done on many other previous flights.

“I don’t know what was different this time but TSA agents aggressively attempted to do a body cavity search in public,” she wrote, adding that she had previously registered and qualified for the “TSA PreCheck” program.

Albert said she was next asked to remove her shoes, but tried to explain that she did not have socks on and that the cream she was carrying was for an infection from current cancer treatment, which had spread to her feet. She said she told agents if they wanted to put her shoes through the X-ray scanner she would have to sit down and not allow her feet to touch the dirty airport floor.

“They allowed that,” she wrote, but then agents began telling her they would begin patting her down from head to toe.

Albert said she did not want them to touch her wig – which she needed to wear after losing hair from cancer treatments – so she took it off her head on her own, to avoid having an agent damage it. “I don’t ever go out in public without it,” she said, noting that the cost of the wig was not covered by health insurance.

Her shoes were put through the scanner but she was not allowed to put them back on until agents did a full-body pat down and search. After sitting for about 20 minutes while agents debated about how to proceed, Albert said she told them her feet were getting cold – another side effect from the chemotherapy she had been receiving.

“They refused to help me,” she wrote. “The woman reached behind me and forceable [sic] and aggressively put her hands down my jeans in the back.”

Afterward, she said the agents “at some point” offered her a room, but would not give her back her boots to walk there. Albert cannot walk barefoot, she noted, because of open sores and rashes on her feet from her treatment.

“When I kept asking why they needed to do all of this, they kept saying because I wanted to bring medical cream on the plane,” wrote Albert, adding that agents never told her they had any issue with anything they had seen on her X-ray scan.

In a video that was taken of the incident, Albert says viewers can plainly see a female TSA agent “shove her hand up my crotch and then try to go down my shirt.” She said she told the agent again at that point that she had a medical port following a lumpectomy.

Albert said she also voluntarily raised her shirt rather than allow agents to touch  her breasts and medical port “with pressure.”

“Finally, a supervisor arrived” after agents decided to call law enforcement – something Albert agreed with. “The only way I was allowed to proceed was when the supervisor was kind enough to have more compassion and possibly think the 2 agents went too far and took me into a private room for a regular soft pat down.”

But that wasn’t the end of her ordeal. She said that even though nothing showed up in her baggage as it went through the scanner, agents nonetheless went through it, with one agent even joking about all of her sets of eyelashes.

“I told her, it’s because I don’t have real ones from my cancer treatment,” wrote Albert. “I would have thought at that point, the humiliation would have ended.”

With the TSA, the humiliation never ends.