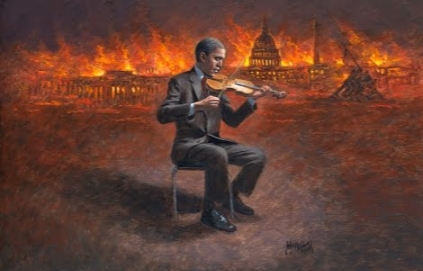 For the last eight years, Barack Obama has functioned as a kind of “sleeper cell,” achieving a number of devastating milestones of destruction against America that eerily parallel the strategies of nation-crushing subversion mapped out by the Soviet KGB (see video below). Apparently mirroring Yuri Bezmenov’s described subversion plan with careful precision, President Obama has doubled America’s national debt and thrust 10.7 million more people onto food stamps… all in just eight years… all while subverting the culture, education, law enforcement and religion.

Tragically, this sort of irresponsible debt spending is exactly what Obama ran in opposition to during his 2008 campaign:

While he was running for president, Obama criticized President Bush’s deficit spending, calling it “irresponsible” and “unpatriotic.” Obama said at a presidential campaign event on July 3, 2008:

“The problem is, is that the way Bush has done it over the last eight years is to take out a credit card from the Bank of China in the name of our children, driving up our national debt from $5 trillion for the first 42 presidents — 43 added $4 trillion by his lonesome. So we now have over $9 trillion of debt that we are going to have to pay back — $30,000 for every man, woman and child. That’s irresponsible. It’s unpatriotic.”

Obama, with what will be nearly $8 trillion tacked on to the national debt, has added by far more to the U.S. debt than any president in history.

You will not be the least bit surprised to learn that almost no one on the left has criticized Obama for his out-of-control debt spending. According to the left-wing media, debt spending is always good as long as it results in bigger government.

In the “nothing is quite as stupid as Big Government” category, President Obama has also managed to put another 10.7 million Americans on food stamps. “The number of food stamps recipients went up by 10.7 million people, a 32 percent jump, since President Obama took office in 2009, according to data released by the Department of Agriculture (USDA),” reports Breitbart.

“The cost of food stamps to taxpayers also increased over the time Obama was in office.  As of 2009, all food stamp recipients received up to $50.3 billion in benefits.  As of 2016, that number has increased to $66.6 billion, an estimated increase of $16.3 billion,” says the article.

Keep in mind that food stamps can be used by buy processed junk food that promotes cancer and diabetes, both of which cost the government even more money on long-term “sick care” expenditures. In effect, Obama is making sure America’s long-term health care costs will skyrocket by handing out more money so that left-wing voters can eat themselves into chronic degenerative disease. Once again, it’s all perfectly aligned with the Soviet KGB plan (see video below).

The highest art of warfare is not to fight at all… but to subvert anything of value in the country of your enemy until such time that the perception of reality of your enemy is screwed up to such an extent that he does not perceive you as an enemy, and that your system, your civilization and your ambitions look to your enemy as an alternative, if not desirable then at least feasible. That’s the ultimate purpose, the final stage of subversion, after which you can simply take your enemy without a single shot being fired.

Politically speaking, this is all widely considered an “achievement” on the left, whose very existence depends on keeping the voters trapped in a cycle of poverty and government dependence.

While Republicans would consider it a victory to get people off food stamps and back on their own two feet, Democrats measure success by increases in government dependence. “Equality” means making sure everyone is equally oppressed to the point of systemic poverty, from which the left-wing politicians promise more “benefits” if ignorant Americans will elect them into power. This is all designed to push America toward accepting the philosophy of communism.

If you consider his real-world actions, it looks a lot like Obama is a “sleeper cell” agent working against America. Yes, even his birth certificate document has been proven to be fraudulent, according to a comprehensive recent analysis.

A years-long forensics investigation into the computer image of the long-form Hawaiian birth certificate image that Barack Obama released during a White House news conference during his first term and presented to the American people as an official government document concluded it is “fake.”

Now, what has been described as the only official law enforcement investigation ever done into the Obama birth certificate, ordered by Sheriff Joe Arpaio of Maricopa County, Arizona, has concluded it is “not authentic.”

That certificate belongs to Johanna Ah’nee.

The copied items include the word “Honolulu,” “Oahu” twice, three different Xs. Their identical nature raised serious questions since they would have been applied to original documents by moving a typewriter carriage and roller at the time, a left date stamp and a right date stamp.

One of the experts who assisted in the investigation was Reed Hayes, a court-qualified handwriting and document examiner, who runs a business in Hawaii. He is on the board of the Scientific Association of Forensic Examiners and has been in business nearly 40 years.

“We had two experts from two countries in separate disciplines of forensics that came to one conclusion: Barack Obama’s long form birth certificate it not authentic,” the report said.

From the video (below):

“The highest art of warfare is not to fight at all… but to subvert anything of value in the country of your enemy until such time that the perception of reality of your enemy is screwed up to such an extent that he does not perceive you as an enemy, and that your system, your civilization and your ambitions look to your enemy as an alternative, if not desirable then at least feasible. That’s the ultimate purpose, the final stage of subversion, after which you can simply take your enemy without a single shot being fired.”

* Espionage only occupies 10 – 15% of time, money and manpower activites of the KGB.

* The other 85% of the KGB activity is subversion.

* The aim is to destroy the country of your enemy.

* Subversion activity is overt and easily observable.

* According to western laws, subversion is not a crime.

* Subversion is a two-way activity. The enemy must be willing to be subverted.

* You cannot subvert the Soviet Union because the borders are closed.

* Subversion can only be successful when the agent of subversion has a responsive target.

* The USA is a “receptive target” of subversion.

* Sun-Tzu was the first expert in subversion in ancient China.

* He said it is inefficient to fight on the battlefield.

* The basics of subversion are taught to every student of the KGB in the USSR.

THE FOUR STAGES OF SUBVERSION

In education, distract them from learning something constructive, pragmatic and efficient. Instead of mathematics, chemistry, history, teach them sexuality, home economy, anything to distract.

In social life, replace traditionally established institutions with fake organizations. Take away the initiative from people, take away the natural links between individuals and replace them with bureaucratically controlled systems. Establish social workers’ institutions ruled by bureaucracy. Eliminate the family and replace the main concern with the paycheck from the government.

In government, replace elected officials with unelected bureaucrats who control the people.

In the major media like the New York Times, you don’t have to be an excellent journalist. You have to be exactly a mediocre journalist.

For power structure: It is slowly eroded by those who do not have qualifications nor the will of the people.

Law enforcement: Put into place a slow substitution of basic moral principles, where someone who used to be a criminal is now considered a victim.