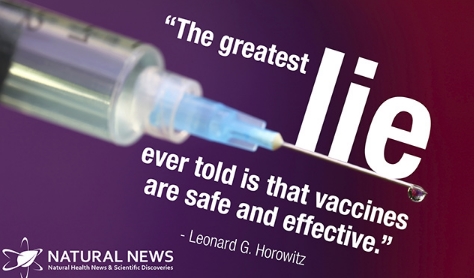 It’s become increasingly difficult to find the truth in modern news media, with so many of the typical outlets being biased, deceptive, manipulative and dishonest. Thus, it isn’t too surprising that the website Politifact is decisively pro-vaccine and pro-GMO. The organization says it fact checks what politicians and others with political opinions say, and then uses its “Truth-O-Meter” scale to rate how accurate the statements are. Ratings range from “True” and “Half True” to “Mostly False” and “Pants on Fire!” Although this may sound good in theory as a way to rate information, the website actually hires “fact checkers” who are completely biased in favor of vaccines and GMOs.

For example, in September 2015 Politifact published an article titled “Ben Carson says pediatricians realize need to cut down number and proximity of vaccines.” The piece calls out Dr. Carson for saying in a Republican presidential debate that certain doctors were decreasing the number of vaccines that children receive and spreading out vaccines so children don’t receive as many at one time. It proceeds to offer a completely pro-vaccine argument that anyone who’s studied the vaccine issue has heard before:

“(The) vaccine schedule is also supported by the American Academy of Pediatrics and the Centers for Disease Control … Leading medical organizations have concluded that the scheduling of vaccines — including multiple ones at once — is safe.”

One curious aspect of this article is that Carson is an internationally renowned medical doctor who was director of pediatric neurosurgery at a prestigious university medical center (Johns Hopkins) for decades before retiring and running for president. Meanwhile, according to the byline, the article’s author does not have medical credentials.

Another Politifact article, “Fact-checking vaccines and measles” from February 2015, discusses “safety of the measles vaccine — which the scientific community and the vast majority of the population consider long-since settled.” This is a another clearly pro-vaccine stance that does not objectively consider whether vaccines truly are safe.

When it comes to the issue of whether vaccines contribute to autism, the article flat-out denies that: “There’s a lot we don’t know about what causes autism, but doctors we spoke with said you can definitely rule out vaccines. Decades of epidemiological research has demonstrated autism rates do not increase when vaccines are introduced to a population. And biologically, no lab work has demonstrated a way for vaccines to cause autism.”

Also in 2015, Politifact stated that none of the vaccines that conventional medicine advises for children contain mercury, which is completely false, because flu vaccines continue to contain high levels of mercury.

Claiming that GMOs pose no risk of harm

In addition to the practice of administering unproven and potentially dangerous vaccines, another controversial practice of modern society is the free-wheeling use of genetically modified organisms (GMOs) in crops. Politifact is biased in favor of GMOs too, as the March 2015 article “Sen. Donna Nesselbush: three quarters of processed foods have genetically modified organisms” says this:

“They have been on the shelves for nearly two decades. U.S. products have been approved for market by as many as three different federal agencies. Independent safety testing has been done in Europe.”

Despite whatever Politifact might try to convey, vaccines and GMOs are not as fine and dandy as the medical establishment would lead Americans to believe. Politifact is clearly a website that readers should take with more than a grain of salt. Its Truth-O-Meter is anything but truthful and reliable in many instances, such as when it comes to accurate reporting about the truth of vaccines and GMOs.