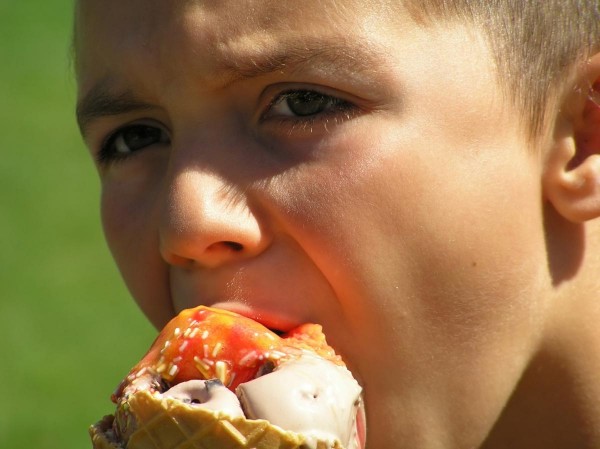 Childhood obesity is undoubtedly one of the biggest and fastest growing problems of the 21st century. According to the American Heart Association, about one in three American kids and teens is overweight or obese.

A new study, published in the journal Pediatrics, found that food advertising that children view while watching their favorite shows can persuade them to eat more junk food, even when they’re not hungry. The study is the first of its kind to examine the effects food advertisements have on the snacking habits of preschoolers, said Jennifer A. Emond, lead author of the study and an assistant professor at the Geisel School of Medicine at Dartmouth College.

The powerful effects of food advertisements

These new findings mirror previous research where they examined the effect of TV ads among school-age or older children. Today, however, highly tasty, unhealthy foods are heavily advertised on TV and widely available to children as young as 2.

The experiment involved 60 children from New Hampshire and Vermont aged between 2 and 5. The researchers focused on how advertising influenced the eating habits of these youngsters in the absence of hunger. To take away feelings of hunger the preschool kids had a healthy, filling snack just before watching a TV show. Furthermore, they were given unlimited access to two different snacks during the show.

They found that kids who watched the TV program with ads for Bugles consumed, on average, 29.5 kilocalories more. Furthermore, the authors reported that the children who watched the Bugles ads ended up eating more of the advertised corn snack even if they were not familiar with it.

“Overall, our research suggests that exposure to food ads can prime eating behaviors in young children that tells children to respond to external signals instead of listening to their own internal signals of fullness and hunger,” Edmond said. “That learned response may set children up for developing poor eating habits that contribute to obesity.”

Food ads prompt kids to eat even when they’re not hungry. The authors of the study believe that limiting food commercials targeted at children could help them eat more healthily and consume fewer calories.

A 2015 report by the University of Connecticut’s Rudd Center for Food Policy and Obesity, stated that as much as 40 percent of all food and beverage ads that children and teens see on television are for unhealthy snacks.

According to Andrew Hanks, assistant professor of human sciences at Ohio State University, the more parents know about the impacts of TV commercials on kids, the more they can help their children prepare to process the messages and opt for healthier snacks – such as carrot sticks and sliced apples.

Another study published in the journal Pediatrics earlier this year, reported that marketing healthy food in the same way as unhealthy foods can nearly triple the likelihood of a child munching on fresh, organic fruits and vegetables. Now it is up to the TV marketers to help make the change.

In the meantime, screen time, especially during meals or snacks, should be limited. The American Academy of Pediatrics (AAP) does not recommend any screen time for kids under 18 months, and no more than one hour a day for children aged between 2 and 5 to improve language development, support sleep and limit a sedentary lifestyle that may pave the way towards obesity and its related problems.