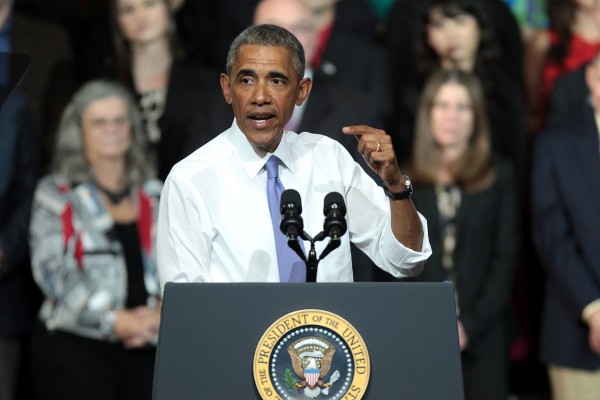 It is always darkly comedic whenever the peaceful nature of President Barack Obama is mentioned. The fact that the Regressive Left continues to embrace the fact that he is a Nobel Peace Prize winner shows just how delusional and simply disconnected from reality these people are. They are lauding a man who dropped tens of thousands of bombs while the United States wasn’t even at war. That should be frowned upon to a degree that is difficult to fathom, yet the Left simply ignores it as if it never even happened.

In fact, it was recently revealed that the Obama administration dropped an astonishing 26,171 bombs in 2016 alone. If that doesn’t leave you feeling at least somewhat uncomfortable, you should be concerned. …

Teresa Welsh of McClatchy DC reports, “According to an analysis of Defense Department data from the Council on Foreign Relations, a non-partisan think tank, the majority of the bombs were dropped in Iraq and Syria. The U.S. leads an international coalition fighting the Islamic State group in both countries and has carried out air operations in attempt to reduce the area controlled by the terrorist organization.”

Of the bombs dropped, 12,192 were in Syria, while Iraq was on the receiving end of 12,095. There is no other way to cut it; that is an excessive number of bombs to have dropped in a calendar year. But when you consider the fact that the man responsible for that number of bombs landing in the Middle East received a Nobel Peace Prize just a few years earlier, it is absolutely insane.

This is a classic Leftist tactic, though, and it is one that more people should have picked up on by now. They continue to ignore their – at least borderline – fascist behavior while pretending to be peace-loving, tolerant humanitarians. In reality, they are the exact opposite. They believe in totalitarian governments; they promote genocide and racism; and they are anything but tolerant of those who have opinions that are even remotely different to their own.

Barack Obama is not a hero for bombing countries in the Middle East. Barack Obama is not a peaceful president that has avoided engaging in unnecessary battles. Don’t buy into the mainstream media’s coverage of the Obama administration. None of it has been true, and all the facts are slowly coming out to help expose what has really been going on behind the scenes. History will remember the truth – and future generations will be stunned that this man has been revered for his peaceful policies.