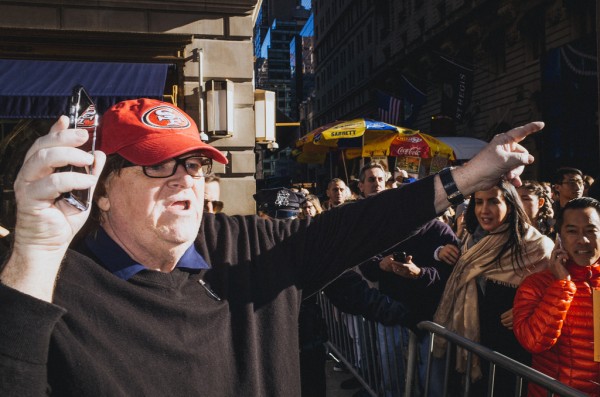 Michael Moore has expanded – both in poundage and misled ideology – since the late 1980s, when he filmed his debut documentary, Roger & Me, which chronicled the aftermath in Flint, Michigan, when Roger Smith, the Chairman and CEO of General Motors, decided to close a production plant there. Thousands of hard working Americans, all of whom probably voted for Trump, were laid off during those first globalist waves that sucked automotive jobs out of Michigan and into Mexico.

You might think Michael Moore would appreciate Trump’s anti-globalist stance, but that isn’t the case. He’s using his liberal platform and notoriety to mock and disrespect the man who began saving jobs even before taking office.

Mr. Moore is fired up, reports Breitbart. He is calling for Trumps’s first 100 days in office to be filled with “protests and resistance actions.” And he and many other groups that are forming around the nation will be “relentless” and stay “busy, busy, busy,” attempting to do just that.

Speaking on lame stream media’s MSNBC, Moore appears almost giddy as he anticipates wide participation in the Women’s March on Washington, which takes place in the nation’s capital one day after the inauguration. Moore declares that the incoming president is “unhinged,” and hopes his administration’s time and season will be “potentially short lived.” He doesn’t elaborate on exactly what he means by that statement. Moore also declares that he, along with hundreds of other activist groups “have to throw everything at [stopping Trump] … .”

Before the election, Moore was interviewed by Rolling Stone. The conversation took place shortly after he had completed a couple of one man shows in Wilmington, Ohio, that became a quickly edited project entitled Michael Moore in Trumpland. The film showcases Moore’s support for Clinton, but as EW.com concludes, some of the movie’s dialogue actually explains why Donald Trump won. Here’s an excerpt:

“So on Nov. 8, the dispossessed will walk into the voting booth, be handed a ballot, close the curtain, and take that lever or felt pen or touch screen and put a big f—ing ‘X’ in the box by the name of the man who has threatened to upend and overturn the very system that has ruined their lives: Donald J. Trump.”

In that same Rolling Stone interview, Moore explained that any person that marks that “X” for Donald   Trump is a “legal terrorist.” I wonder if that’s in the same category as a deplorable. If Michael Moore really gave that legal terrorist a bit more concrete thought, he would probably come up with a few other folks who would qualify as terrorists.

As reported by New Eastern Outlook, during President Obama’s two terms in office, there were 26,000 pounds of bombs dropped on Pakistan, Syria, Iraq, Afghanistan, Yemen and Somalia, and thousands of innocent civilians were murdered. George W. Bush’s lies about weapons of mass destruction killed a million innocent civilians in Iraq. Hillary and Bill’s complete body count is likely unknown, but the men in Benghazi who cried out for help from the Clinton State Department sure didn’t get any.

It’s quite doubtful that all those women who Michael Moore will be marching with will give any thought to the nearly 60 million innocent unborn who were terrorized by abortion saline injections, suction tubes and other invasive devices.  But, that’s still legal too, isn’t it?