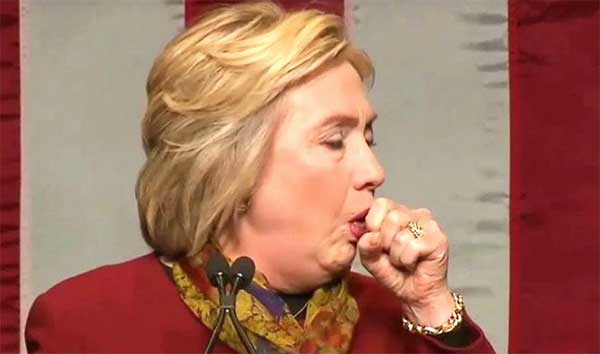 Natural News has warned of the public health threat from antibiotic-resistant superbug bacteria, but drugs may be also ineffective against something more mundane such as a persistent or lingering cough, a.k.a. a hacking cough.

In Wales and elsewhere in the United Kingdom, officials have evidently determined that trying to treat the virus that is apparently responsible for a hacking cough with antibiotics is a waste of time. Thousands of people in the U.K. currently are dealing with a nagging cough this winter, possibly even Queen Elizabeth.

The Cardiff and Vale University Health Board contends that there is little a physician can do to alleviate the condition of a prolonged cough and recommends rest and drinking plenty of fluids. “Antibiotics will be of no help for most normally healthy people,” Dr. Anna Kuczynska remarked. Against this backdrop, the Board suggests that making a doctor’s appointment for a prolonged cough will just tie up waiting rooms unnecessarily.

Adenovirus is believed to be the culprit in the hacking cough outbreak, according to an expert with whom the Independent of London consulted. “John Oxford, professor of virology at the University of London, said the outbreak was likely to be caused by adenovirus – the microbe behind conditions such as bronchitis, pneumonia and gastroenteritis. Adenovirus can survive at body temperature and can push down into the lungs, causing a chesty cough that can remain long after other symptoms have eased.”

Frequent hand washing and staying indoors as much as possible “because cold air soon stirs up the cough reflux,” can be beneficial, he noted.

The U.S. Centers for Disease Control and Prevention acknowledges that about one-third of all antibiotics prescribed for outpatients are unnecessary, much of it for what it describes as acute respiratory conditions “such as colds, bronchitis, sore throats caused by viruses, and even some sinus and ear infections” and that antibiotic resistance is a major problem across the world.

The National Health Service, the government-run agency in the U.K., indicates that a hacking cough generally resolves itself within three weeks. Individuals should see a doctor if the condition continues beyond 21 days, according to the NHS, because it may be an indicator of a respiratory tract infection, allergies, or a more serious illness such as lung cancer or tuberculosis.

Queen Elizabeth, 90, has been out of the public eye in the past few months, including passing on her attendance at the traditional Christmas Day church service, and some believe that she might be suffering from a hacking cough. A Buckingham Palace statement earlier this month announced that the Queen was recuperating from a heavy cold.

Dr. Clare Gerada of the Royal College of General Practitioners told the London Telegraph that “We are seeing an awful lot of people this winter with a virus that is more severe than a normal cold, almost a type of bronchitis. It is causing a hacking cough and if the Queen has got it, then she is probably exhausted from coughing. It may well be affecting her sleep as well, which would leave anyone feeling exhausted, never mind a 90-year-old.”

Former presidential candidate Hillary Clinton famously experienced several coughing fits on the campaign trail, and was later diagnosed with pneumonia after collapsing at the 9/11 ceremony, for which she received a course of antibiotics.

Natural News has previously identified some home remedies that may help alleviate a cough, including a mixture of honey, lemon juice, coconut oil, ginger tea, black pepper and honey, thyme tea, and peppermint tea. Echinacea products and zinc supplements may also be helpful.

Over-the-counter cough syrup is apparently minimally effective, however, and may be little more than a placebo, however, according to a recent study from the American Chemistry Society.