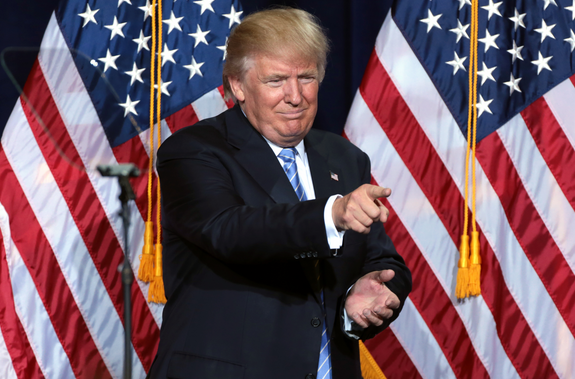 President-elect Donald Trump replaces President Faily McWorsethancarter Friday, but we’re not going to be able to Netflix and chill in the fight for freedom. The left and its establishment allies are desperate to regain the power they see slipping away, and we need to understand that the only way to stop them is to beat them to a pulp and leave them whimpering in the fetal position, crying out for their genderfluid mommies.

(Article by Kurt Schlichter from Townhall.com)

The left’s strategy is simple – deny normal Americans normalcy. After all, that’s what we really want, a return to normal. We haven’t experienced real normal since the Democrats denied the legitimacy of W’s election in 2000 – you know, during one of those time frames when denying the legitimacy of the president was cool, a phenomenon that coincidentally only occurs whenever a Republican wins. Then came 9/11 followed by 15-plus years of botched wars and economic decline, along with an unprecedented cultural offensive against normal Americans. Once the only place you heard that average Americans were racist sexist homophobic everythingist everythingphobic was on college campuses; now, with the active assistance of Obama and his collaborators, it’s everywhere – in our entertainment, in the media, in our faces.

And we’re sick of it. #ThisIsWhyYouGotTrump

We want to return to normality, and in an ironic twist of fate it was Donald Trump, the most unnormal guy imaginable, who promised it. Hillary Clinton promised more war and more weakness, more of the same economic malaise that has left most of America suffering, and much, much more of the same cultural scolding and calculated oppression of anyone so subhuman as to not live in a city and believe there are only two sexes. Trump committed to return to America’s normal state of economic prosperity, to America’s normal state of military supremacy abroad, to America’s normal state of self-confidence in our own exceptionalism. And we wanted to go back to a time where creepy activists weren’t trying to shoehorn men in skirts into our little girls’ locker rooms.

Normalcy. It’s what we want, and liberals want to deny it to us in order to doom Donald Trump and reopen their path back into power.

So how will they do it? Constant resistance at every turn. They will ignore norms and rules – remember, norms and rules are only supposed to constrain us. They will lie, cheat, and engage in any conduct that they believe will help their hateful cause. A huge part of the progressive effort will go toward policing their own for any weakness or faltering in their lockstep opposition to everything Trump and the GOP do. Take that, Springsteen cover band! How dare you perform the Boss’s hackneyed anthems for the president? The good thing is we will get to watch four to eight years of the left devouring itself. I’m already stockpiling the popcorn.

In Washington, there are Democrats whose constituents supported Trump and want him to succeed. In a normal world, these would-be moderates might cooperate and compromise with the GOP majority to influence policy, but their own party absolutely will not let them do that now. The hard left activists are in control, and they will crush any dissent. So the Democrats who might have moderated and played along now have to defy their party to do so knowing the activists will not be forgiving. And it’ll be wonderful watching the Dems kneecap their 2018 candidates to force utterly symbolic losing party line votes on cabinet appointments and on things like the Obamacare repeal.

This is great for us. It will force the Dems in moderate or even red areas to fall even further out of step with their voters – something that has cost the Dems over a thousand seats across the country since Obama was sworn in. In 2018, something like 25 Democrats or Dem-voting independents are up for election to the Senate, many in moderate areas. If Trump is seen as succeeding, especially on the economy, that could make the midterms a Democrat bloodbath. A wonderful, delicious bloodbath.

It will work for a bit, especially since most entertainers today are craven wusses – in World War II, Jimmy Stewart left stardom to fly B-24s over Ludwigshafen. Now, adverse election results make them flee to Arizona to commune with rocks. Many entertainers will decide to lower their profiles in order to avoid the Hollywood Gestapo, but normals won’t like the bullying. Normals generally think people should be allowed to say what they want, and they generally think you should respect the president even if you didn’t vote for him – pretty much what Nicole Kidman said. Do you think more normal people or fewer will be going to the next Meryl Streep movie? Sure, her target demographic of loveless cat women will always show up to watch her talk in a funny accent, but the rest of us? Hard pass.

Then there is the fake moral posturing. We will see plenty of this tactic, and we need to laugh at it. The notion that because John Lewis got beat up by fellow Democrats a half century ago somehow immunizes him from criticism for his cheesy lies about and general scumminess toward Republicans today is a joke. It’s always fun to watch liberals unilaterally designate “heroes” and inform us we’re not allowed to say anything negative about their antics. When John McCain was running what could only in the loosest sense of the word be called a campaign against Obama, the left wasn’t enforcing the Hero Exemption on his behalf. That only became a thing again when it became a useful thing again after Trump ignored it. Democrats don’t get to choose my heroes, or yours, and we need to aggressively reject this tiresome gambit.

What about the lying mainstream media? Those hacks – no one’s listening to them anymore. Still, every day every story is going to be about the tyranny that is Trump, except there won’t be any actual tyranny. Homelessness is going to make a big comeback now that Obama is gone. Everything will hit women, minorities, and men claiming to have uteruses hardest. No one cares. In pulling this same nonsense, the dying media will only hasten its own, long-overdue, demise. Hey media, remember those false perv stories about Trump – who do you think suffered a net loss of credibility, him or you?

Then there are the boycotts. Now, wussy corporate leaders will often roll over when a bunch of leftists tell them what to do. But it gets old. Eventually, companies are going to realize that you can’t succeed when you are alienating at least half of the population. Plus now we have a president who will not hesitate to call out dirtbags. A couple tweets from the president about companies who are dissing his supporters and that may reorient their priorities. Now, do we want a president directing his people away from private companies that engage in policies he dislikes? In theory, no. But now that you libs have changed the rules, hell yes! We need to deal the pain right back at them – it’s the only way they will learn.

A key problem with the liberal resistance strategy is that constant activism is exhausting. It’s even exhausting to watch – normal people are already tuning out the daily deluge of anti-Trump fake news in the lying mainstream media. The liberal strategy is to turn everything up to 11, but you can’t do that for four years. While the hardcore left is invested in its hatred of our new president, most of America is not. They don’t want every waking hour of their lives spent listening to people whine about Trump, especially when they generally like what he’s doing. The fact is Trump is already doing well. The market is up. He’s getting commitments for new jobs from big companies. Obamacare is getting a stake through its putrid heart. And the normals are going to tune out of the hate and reelect him to spite you liberal twerps.