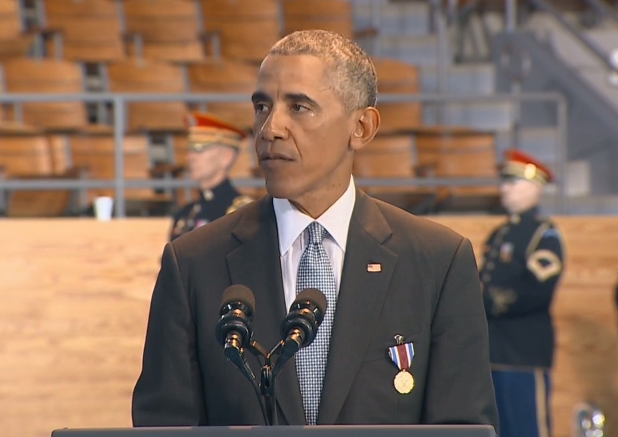 Most presidential administrations endure scandals at some point during their tenure, as that’s just part of the cesspool that has become our nation’s capital. There are so many careerist bureaucrats inhabiting various positions of power throughout the federal government you could describe it as an infestation.

But some administrations make their own scandals, either through acts of omission or acts of commission. For the outgoing Obama administration, it was guilty of both: Creating scandal through direct implementation of policies and by ignoring or attempting to cover up misbehavior and illegality.

Though this is largely a mental exercise—we don’t seriously expect any legal action to be taken against any of the people listed below—the country would be better served, and future leaders, appointees and careerists would be forewarned, if the incoming Trump administration would make examples out of at least some of them.

— President Barack Obama: There is only one way, constitutionally, to hold presidents legally accountable for their actions in office—impeachment. Unfortunately, successive congresses during his tenure elected not to do so, and frankly, that’s because members of his own Democratic Party would never have gone along with Republican demands that he be held liable for the many unconstitutional actions he took. It takes a simple majority in the House to impeach a president, but two-thirds of the Senate must vote to actually convict, and there were never enough Republicans or Democrats who would have done so.

Every time ‘President Pen & Phone’ went around Congress to change U.S. law by executive order, he committed “high crimes and misdemeanors”—the constitutional standard for impeachment proceedings. He did so with immigration law, appointments to federal agencies and by ordering the U.S. military into action without proper authorization. Here’s a comprehensive list.

Obama should have also been held liable for money laundering and, perhaps, even bribery, as part of his Iran ‘nuclear deal’. Recall that as part of the deal, Obama authorized a payment of $400,000 to Iran that was actually delivered on a pallet via a cargo plane in the middle of the night.

White House liar-in-chief Josh Earnest claimed that the money—paid in euros and other currencies—was not a ransom payment to get back four Americans illegally detained in Iran, but Republicans and even some Justice Department officials begged to differ and saw the payment for exactly what it was: A ransom, in violation of every sense of good diplomacy and better judgement.

And while the president is commander-in-chief of the armed forces, he does not have the authority to order the assassination of anyone, especially American citizens living overseas, no matter what they have been accused of. And yet Obama has ordered scores of assassinations using drones all over the world. In addition to the president, anyone serving Obama who had a hand in carrying out these illegal orders should also be held liable.

— Attorney General Eric Holder: Tops on the list for this former Obama Cabinet member occurred early in his tenure. “Operation Fast and Furious,” which was a “gun-walking” op that saw the Justice Department, via the ATF, allow thousands of semi-automatic rifles “walk” into Mexico from U.S. gun dealers, in an unsuccessful bid to track them to drug cartels, was actually something else.

It was a very early attempt by Holder (and Obama) to enact stricter gun control measures. In 2013, investigative reporter Sharryl Attkisson reported that, according to ATF documents, officials within the agency used the operation to argue for “controversial new rules” about gun sales.

The reason why he should be held to account legally is because hundreds of people, including federal agents, have been killed by the weapons that the ATF, at Holder’s behest, trafficked into Mexico.

— Lois Lerner: You may have forgotten her, but she was integral to the administration’s attempt to politically weaponized the Internal Revenue Service.

Lerner was the head of the Exempt Organizations division around the time of Obama’s reelection campaign, in 2011-2012, who [allegedly] led an effort to freeze out conservative political organizations seeking tax exempt status ahead of the election. The delay meant they could not engage in any political activity on behalf of Republican candidates such as promoting and supporting them publicly, which was not only an abuse of the IRS’ power but a gross constitutional violation (First Amendment).

Indeed, as we reported, Obama’s IRS was completely compromised in that it regularly engaged in political activity of its own to help Left-wing causes and the administration. But we don’t know what Lerner’s full involvement was because she continually pleaded her Fifth Amendment right against self-incrimination (which only guilty people tend to do). She should be made to testify in court as to what her role actually was and then punished accordingly, so that the IRS is never again used as a weapon against political opponents—since Obama’s Justice Department refused to do so.

— Hillary Clinton: There is so much red meat, legally speaking, when it comes to two-time presidential loser Hillary Clinton, it’s hard to know where to start. So we’ll just go at it from the beginning, in bulleted format:

* Private email server: From before she began her tenure as the nation’s top diplomat heading up the State Department, Clinton set up her own ‘home brew’ email server, which she used throughout her days as secretary of state. Not only was this highly unethical and unorthodox, her unsecured server was used to conduct official State Dept. business, which included handling the most sensitive and highly classified material—a felony violation of the Espionage Act and other statutes governing the handling of such material. Even Obama knew she was doing this, because he used an alias to email her on occasion.

* There are many indications that Clinton used her position as secretary of state to enrich her husband (and herself, indirectly) as well as their foundation. Not only are such actions highly unethical, but they very likely ran afoul of U.S. law.

* In all, Clinton violated nearly a dozen statutes and laws during her tenure, as well as harmed U.S. national security and put every single American at risk, no matter what their political affiliation, and she should be held accountable.

* Clinton was the initiator of the Iran nuclear deal, which will eventually lead to a new conflict in the Middle East as the West (and Israel) will have to, at some point in the future, deal with a nuclear-armed Iran threatening its neighbors.

— John Kerry: Taking over for Clinton at the State Department, Kerry saw the Iran nuclear deal to its end, and thus shares in the fallout (no pun intended) that will stem from it.

In addition, Kerry had a part in securing treaties disguised as ‘international agreements’ which should have been subjected to advice-and-consent votes in the Senate (where he served for decades), because they violated the U.S. Constitution.

Kerry was also accused of violating international law by the Palestinian government for suggesting that refugees be resettled in countries other than their home country.

— George Soros: Nearly all of the political protesting and chaos in American society during the presidential campaign and since has billionaire Hungarian financial guru George Soros’ fingerprints all over it.

As reported by Bugout.news, his meddling and financing of protests that resulted in property damage and injuries to Americans amounts to sedition, and he should be investigated and charged:

Not only should American cities rocked and burned by protests fueled with Soros money bill him for the damage, they should seek legal action against him as well. You can provide people with the opportunity to protest, but you cannot spur them to riot, loot and destroy.

Protests that he fueled cost cities tens of millions of dollars (like Ferguson, Missouri, and Baltimore); much of what was destroyed will never be rebuilt.

“George Soros should be arrested, tried and convicted, with the message sent loud and clear: If you conspire to destroy American cities, you will be held accountable,” Bugout.news reported.

­— Obama, Clinton and Kerry: Because of the manner in which they supported Left-wing revolutionary movements in the Middle East, several governments there have either been toppled or are fighting for their survival in attempts to put down insurrections and civil war. These three are guilty of war crimes involving the murders or killing of hundreds of thousands of people in Iraq, Yemen, Syria, Egypt and Libya, for starters.

Trump has said he has no interest in pursuing criminal charges against anyone in the outgoing Obama administration, even though many of them deserve it. But that leaves room for those he appoints to do so, if cause is warranted. We’ll see what happens.