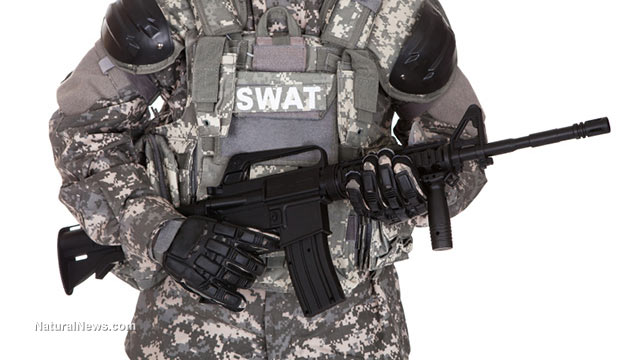 Don’t look now, but yet another would-be Josef Stalin wants to strip more Americans of the right to better defend and protect themselves from harm.

As reported by Countercurrent News, some Democrats in Congress have introduced legislation that would criminalize ownership of ballistic helmets and body armor (bulletproof vests), ostensibly as a measure that would protect police and federal agents.

The bill, H.R. 378, was introduced in January 2015. Called the “Responsible Body Armor Possession Act,” it would make it impossible for law-abiding Americans to own a reasonable means of self-defense and protection.

The bill, filed by then-Rep. Mike Honda, D-Calif., seeks to ban citizens from owning enhanced body armor, which is defined in the measure as “body armor, including a helmet or shield, the ballistic resistance of which meets or exceeds the ballistic performance of Type III armor, determined using National Institute of Justice Standard…”

That level of body armor and higher is capable of resisting most common rifle ammunition. Indeed, Level III armor has the sole function of protecting the wearer from potential critical injury or death from a gunshot wound.

But if the measure is ever seriously considered or worse yet, passed, it will genuinely serve as an impediment to the average citizen’s right self-defense and protection, with penalties ranging from high fines to time in jail, if you can believe that.

“This bill allows law enforcement to respond to active shooting situations more effectively. The bill prohibits the purchase, sale, or possession of military-grade body armor by anyone except certain authorized users, such as first-responders and law enforcement,” Honda said in a statement at the time, as quoted by Countercurrent News.

There you have it: There is no reason for a lawmaker to want to criminalize personal protective gear other than to give an unfair advantage to federal and state authorities. The only question becomes, why?

Also, as the news site pointed out, this piece of legislation has become far too typical of most bills in Congress and in state legislatures around the country: They propose to address or “solve” problems that do not exist, which is how the country has been transformed into a virtual police state over the past several decades.

The fact is, though murder rates are inching up nationwide and Chicago certainly as a major problem with black-on-black murder, major crime in America is at its lowest point in four decades. That said, police have become more and more militarized than ever as well, often patrolling our streets as though they were patrolling in a legitimate war zone halfway around the world.

Maybe if federal lawmakers “put as much effort into disarming the overly militarized police, as attempting to take away law abiding citizens (sic) ability to defend themselves from would-be shooters, people wouldn’t have the impetus to wear body armor,” Countercurrent News suggested.

Armor is purely defensive in nature and as such should not be targeted for criminality by American citizens who have done nothing wrong and are no threat to society. After all, the right to self-preservation is as basic a human right as there is, and it’s one our founders recognized and enshrined in our Constitution via the Second Amendment. No one should have the power to determine that another person should not have the unfettered right to self-defense, and certainly no government. That Honda and the bill’s co-sponsors think jailing someone for wanting body armor for self-defense is itself a problem: Democrats’ mindset when it comes to legislating is steeped in authoritarianism, not geared towards the expansion of individual liberty and freedom.

And there is this: The U.S. Supreme Court long ago ruled that local police have no duty whatsoever to protect citizens—a ruling that was likely handed down to avoid having police sued every time there was a crime, injury or loss of life and/or property. But that said, the ruling also makes it very clear that the responsibility for self-defense and self-protection falls squarely on the citizen.

What is also interesting to note about this piece of legislation is that it also carries the common rider that government employees and “political subdivisions” are exempt, meaning once again that the government would be able to wield more power over the people.

‘Land of the free’ has given way to ‘land of the over-regulated and untrusted.’