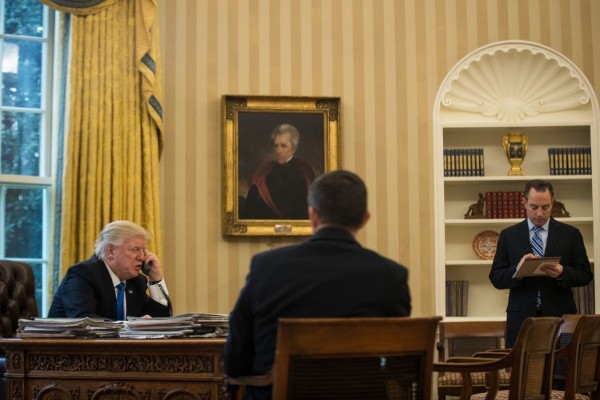 Throughout his exuberant campaign, then-candidate Donald J. Trump pledged repeatedly that he would take a blowtorch to federal regulations he believes have choked business and economic growth, as well as stifled employment and opportunities.

As his second full week in office began, the president did that very thing. Trump’s order, titled, “Presidential Executive Order on Reducing Regulation and Controlling Regulatory Costs,” is the buzz saw to red tape that corporate executives and business leaders have been waiting for, and which Trump promised. (RELATED: Keep track of President Trump dismantling the Washington bureaucracy at BigGovernment.news)

“It is the policy of the executive branch to be prudent and financially responsible in the expenditure of funds, from both private and public sources,” the order states in Section 1. “In addition to the management of the direct expenditure of taxpayer dollars through the budgeting process, it is essential to manage the costs associated with the government imposition of private expenditures required to comply with Federal regulations.”

To meet that goal, Trump’s order actually calls for the elimination of two regulations for every one that is issued moving forward.

In Trump-speak, that is yuuuuge.

The order calls for every federal agency, “unless prohibited by law,” to identify two regulations that are currently in force before a new rule is proposed. And in Section 2 of the order, Trump has mandated that for the current 2017 fiscal year, there be no increase in regulatory costs whatsoever.

All agency heads “are directed that the total incremental cost of all new regulations, including repealed regulations, to be finalized this year shall be no greater than zero,” unless legally unpreventable or otherwise required by other statutes.

Further, the order states that any additional costs from new regulations put into effect must be offset by the elimination of two existing regulations and the costs associated with them. As with earlier executive orders, this one does not apply to the military, national security or foreign policy functions of the U.S. government.

As reported by The Associated Press, Trump stated that “This will be the biggest such act that our country has ever seen. There will be regulation, there will be control, but it will be normalized control,” as he signed the order.  This session took place in the Oval Office, with several small business owners in attendance.

Talking to reporters before the signing, an unidentified senior White House official said the order establishes an annual limit on what new regulations can cost businesses and industries that must comply with them. For the rest of this year, costs tied to new regulations and rules cannot be imposed unless they are mitigated by the repeal of two other rules.

Before they are put in place new regulations are generally analyzed by the White House Office of Management and Budget, the AP noted. And while that process that will continue under the Trump administration, agency heads themselves are now required to identify two regulations to repeal in order to even out new regulatory costs.

Trump has said that, to his surprise, the biggest impediment to business and industry growth are federal regulations. In fact, last week following a meeting with business leaders, Trump said he intended to cut 75 percent of existing regulations, and “maybe more” if he could, which essentially would stick a dagger into the heart of the fat, bloated and inefficient federal bureaucracy. (RELATED: Keep up with Trump’s record-pace to ‘Make America Great Again’ at Whitehouse.news)

“What we want to do is bring manufacturing back to our country,” Trump said. “That doesn’t mean we don’t trade because we do trade. We want to make our products here.”

Business leaders said Trump asked them to submit to him a list of recommendations and suggestions in 30 days that they believe will fulfill his objective of smart regulations that effectively keep the public and environment safe but without imposing crippling, job-killing costs on the economy.

Currently, according to the National Association of Manufacturing, federal regulations cost the economy more than $2 trillion a year.