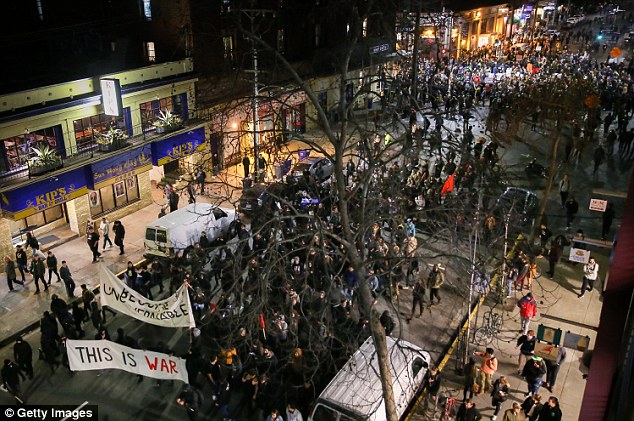 In a recent column for Breitbart News, the site’s senior editor at large, Joel Pollack, lamented not simply the violence and destruction at UC-Berkeley, committed ostensibly in reaction to a planned event featuring Breitbart senior editor Milo Yiannopoulos, but also the “official” reaction, or rather non-reaction to it.

For instance, Pollack noted that Jesse Arreguin, the mayor of Berkeley, just another far-Left city in far-Left California, tweeted that Milo’s “hate speech” and as such would not be “welcome” in the city. This tweet was accompanied by the familiar charges of “bigotry” and that the community would not tolerate being “marginalized” by one man who has a different political viewpoint. A viewpoint, of course, he was unable to share on the intolerant Berkeley campus.

That’s how the Left works: Its adherents self-define their political enemies, then use the same tactics they accuse the enemy of using to shut them down. And when they can’t shame conservatives into silence, they attempt to beat or intimidate them into it. (RELATED: Conservatives won’t be silenced and you can read all about it at Conservative.news)

About that violence, it is also being accompanied by another familiar scene: That of local police standing idly by while innocent people are verbally and physically attacked. At Berkeley this week, one woman was sprayed with pepper spray; one man was beaten unconscious by domestic terrorists using steel rods.

Were these groups merely showing up at events to protest — to express their views without silencing others — they would be perfectly entitled to do so. But lately, they have taken advantage of the timidity of the police — which they helped engineer, through their participation in the Black Lives Matter movement — to run amok, breaking up events and assaulting innocent people in full view of law enforcement officers and even the media. They are almost never pursued and never punished.

He noted further that the Berkeley newspaper, the Daily Californian, reported that just three people were arrested: Two in connection with violence they had committed earlier in the day and only one person at the protest, despite a night of injury, mayhem and property destruction.

That’s absurd, and it’s a travesty, quite frankly. As noted by The National Sentinel, at what point do innocents who are being victimized for attempting to exercise their First Amendment rights get to expect that police will protect them? Is it going to take more people being beaten? Is it going to take people being killed before cops will act? (RELATED: What has the insane Left done to academia today? Find out at CampusInsanity.com)

Because here’s the problem we face, if this kind of Alt-Left violence is allowed to continue unchecked: Sooner or later, counter-groups will begin to show up at these events, ready to battle the Alt-Left terrorists. And what we’ll have then is an all-out war in our streets and on our institutes of higher learning.

If these assaults were taking place outside the realm of a “demonstration” the offenders would surely be arrested and charged with a crime. So what makes violence at political events any different, any less of an assault and battery? If anything, such politically motivated attacks ought to carry stiffer penalties because they are assaults on our constitutional founding.

Actually, yes. It’s all part of the “revolution” – the far-Left movement to replace constitutional government with tyranny. Under the guise of ‘fighting the good fight,’ the angry Left is using the cover of political discourse to impose its will on the rest of the country, no matter what the results were of our last round of elections.

But at some point, the right will push back. It’s inevitable; more Americans stand for the law and order that President Trump and conservatives represent than the violent despotism of the Left.

In a recent podcast, Natural News founder/editor Mike Adams, the Health Ranger, notes that what Milo is brilliantly doing is provoking Leftists into revealing who they really are: Insane, violent, anti-law, anti-free speech communist haters. Listen to the podcast here.