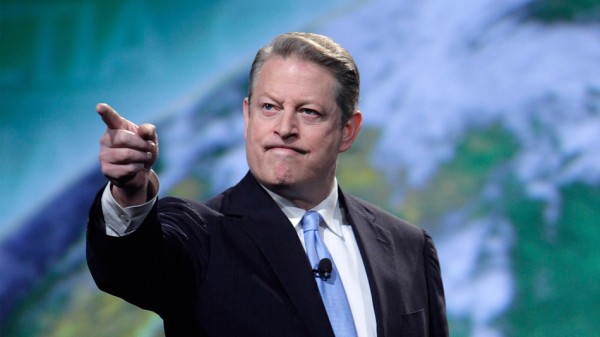 Environmentalist Al Gore, a.k.a. the climate con man, has a new movie to promote, so he gets to fly on private jets and ride around in gas-guzzling limousines. Maybe he’ll even add a new wing on to his mansion with the profits.

The new movie is called An Inconvenient Sequel, a follow-up to An Inconvenient Truth, which was chock full of doom and gloom about made-made climate change and global warming. The film premiered at the Sundance Film Festival last month and will go into wide distribution this summer.

Gore’s activism made him a multimillionaire celebrity. The carbon footprint of his wallet expanded further when, in late 2012, he sold his failed TV channel, Current TV, to Big Oil, i.e., to the Al Jazeera network, which is backed by the royal family of the oil-rich country of Qatar. Gore reportedly pocketed $100 million from that transaction.

The “planet has a fever” pundit also won a Nobel Peace Prize, but then again, so did Obama.

As Natural News previously reported, none of the dire climate change predictions from the first film — which won an Academy Award for best documentary — have come to pass. Among other things, the Arctic never melted, and polar bears are still thriving. Mt. Kilimanjaro is still covered with plenty of show. Extreme weather also has failed to materialized. [RELATED: Read more about the climate change movement at ClimateScienceNews.com]

In the new opus, the former vice president under Bill Clinton tries to justify another weather whopper — that cities all over the world, including Manhattan, are at risk for flooding because of the rise in the sea level combined with storm surges. It was the “single most criticized scene in that movie,” Gore declares in the trailer below.

“In that clip, Gore then shows ‘Superstorm Sandy’ footage of water flooding lower Manhattan, including the memorial site and a quote from Gov. Andrew Cuomo blaming climate change, to prove true Gore’s claim from 11 years ago. But his original prediction was not about extenuating circumstances of a storm like Sandy slamming into New York or any ‘storm surge’ at all. It was about the sea level rise that would be generated as (he predicted) ice melt in Greenland and Antarctica escalated dramatically. The latest maps show that Greenland still has ice 11 years after Gore’s prediction of catastrophic melt due to global warming.” [RELATED: Read more about fake science predictions at fakesciencenews.com]

Even the liberal Washington Post admitted back in November 2012 that “Climate change does not cause storms and did not cause Superstorm Sandy.”

Weather Channel founder John Coleman was fundamentally unimpressed with the original Al Gore movie, which he deemed a “scientific monstrosity,” and has raised concerns about the follow up for similar reasons. Coleman has argued in the past that man-made climate change is a scam, a myth, and unsupported by science.

Health Ranger Mike Adams recently pointed out the oft-repeated claim that 97% of scientists agree that man-made climate change is settled science  — as if science is ever settled — is a bunch of hot air.

In the new movie, Gore apparently also claims credit for ushering in the superficial Paris climate change agreement that was approved with much hoopla on December 12, 2015.

President Trump said in November that he has an open mind about the Paris deal that Obama signed without input from Congress, although he campaigned on rescinding the U.S. commitment just like he pulled out of the Trans-Pacific Partnership upon taking office. The president may be constrained at the moment, given the media hysteria about every decision from the White House, however. An ex-aide said in late January that he expects the president to withdraw from the Paris agreement, although the timetable is uncertain.