The American Enterprise Institute is at it again, accusing opponents of toxic agriculture of starving people to death for not supporting GMOs and glyphosate. Remember, the AEI is a sinister cabal of “profit at all costs” Republican pesticide pushers, and its network of character assassins and malicious operatives includes the infamous Jon Entine, whom Natural News exposed years ago as a violent wife beater and professional muckraker. (After which Forbes.com fired him, but continued his attacks with replacement disinfo propagandists pretending to be journalists.)

Yes, you read that correctly: The pro-Monsanto operatives pushing poisonous glyphosate, genetic pollution and the deep-rooted evil of corporate-dominated seeds accuses GMO skeptics of promoting genocide. It’s sort of like Hitler accusing the Jews of being mass murderers, isn’t it?

If there’s one thing I’ve learned from all the years of exposing the maniacal muckrakers at the American Enterprise Institute, it’s that they harbor almost as much hatred for humanity as Stalin and Mao. If a few million people have to die in order for them to corner the market on seeds and poisons, so be it. That’s what they get paid to do, and since they’ve already sold their souls to Monsatan, they probably figure they might as well cash in during this lifetime and enjoy the heartless bliss of material greed while their dark hearts are still beating.

Read the report below, and stay informed on all this with our websites such as MonsantoMafia.com, GMO.news and GeneticLunacy.com.

Here’s the incredible report from GM Watch, complete with the original links. Find the original article at this URL. And always buy organic to help put Monsanto out of business.

A funny thing happens when we post anything about the University of Florida professor Kevin Folta – the trolls go into overdrive.

The latest to bear down on us on Twitter is Richard Bennett, who began raining abuse on us after we tweeted a link to an article about Folta’s problems with ethics.

“Nobody,” declared Bennett, “hates science as much as vile GMWatch.” He then went on to characterise us as an “anti-science PR agency” and a “disgraceful character assassin” whose “’work’ consists entirely if [sic.] spreading falsehoods” and “downright fabrications”.

Bennett also said we and our ilk were responsible for the deaths of millions, not to mention the “UK vegetable crisis”, due to our “genocidal food policy”.

Our dark deeds, according to Bennett, were undertaken at the behest of the “organic industry” – or “Big Superstition”, as Bennett preferred to call it – which smears “legitimate scientists” like Kevin Folta in order to forward its anti-science agenda.

This is not the first time, of course, that we have been accused of being the mouthpiece of Big Organic, not to mention Big Tractor and various other sinister forces.

Interestingly, Bennett’s apparent concern for the reputations of scientists didn’t stop him from attacking a whole list of scientists who have raised concerns about GM crops. He names them and calls their science “fake”, and in other tweets alleges some of them “fabricate for money” and produce “fake research papers”. He has produced no evidence to back up any of these defamatory claims. 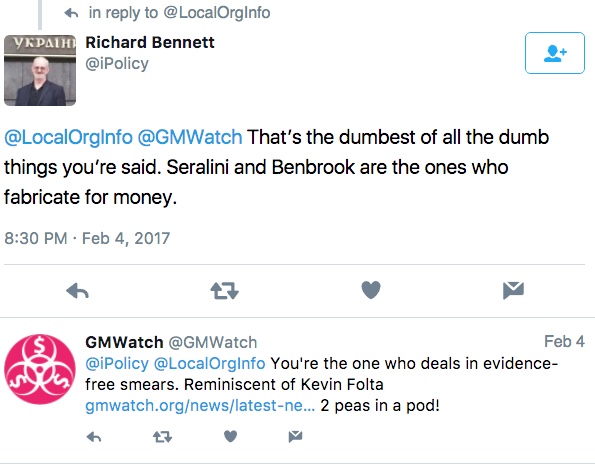 Although Bennett paints our modest funding in the most lurid terms, he makes light of the $25,000 that Kevin Folta received from Monsanto – mere “peanuts”, Bennett declares. In any case, Monsanto’s Folta contributions “weren’t payoffs”, unlike the money we got. They were merely “a piddly travel grant” for a scientist that we were trying to silence on a “trivial technicality”. We tried to point out that whether a scientist is open and honest about his financial backing is hardly a “trivial” matter.

So who is Richard Bennett? And why is he so engaged with the GMO debate?

To go by his Twitter (@iPolicy) profile, he is just a freedom-loving guy who helped to invent wifi. The only link given is to an open forum for experts on telecoms policy.

What his profile doesn’t mention is that Bennett is also “a visiting fellow in the American Enterprise Institute (AEI) Center for Internet, Communications, and Technology Policy, where he studies and specializes in public policies affecting networks, network regulation, and innovation.”

For anyone who doesn’t know, AEI is a lavishly funded right-wing think tank operating out of Washington DC. It promotes an aggressively pro-business and anti-regulation agenda, funded in part by corporate contributions and dark money.

The Vice President of Exxon and the CEOs of Dow Chemical and Merck are among the many corporate figures to have graced its Board of Trustees. And Exxon is also one of AEI’s funders, to the tune of several million dollars – explaining perhaps why Bennett regarded Folta’s Monsanto funding as “peanuts”.

AEI has also had money out of the tobacco industry. Needless to say, AEI has defended the interests of Big Tobacco as well as casting doubt on climate change.

According to the Center for Media and Democracy’s SourceWatch website, AEI is also “among the think tanks that have received funding from telecom giant Comcast, which has aimed contributions to make its lobbying more effective, according to The Washington Post.”

In 2014 Esquire magazine reported, “The American Enterprise Institute’s Richard Bennett wrote a story for a leading tech website” that “did not reveal the Institute’s relationship with Comcast at any point within the piece.” Other material that Bennett wrote for AEI also failed to disclose “his employer’s ties to Comcast”. Bennett denied to Esquire that he knew the extent of those ties to Comcast or how much money they have received from the telecom giant.

Whether the criticism that Bennett and the AEI have received for alleged astroturfing has shaped Bennett’s desire to make light of Folta’s Monsanto funding, it’s hard to say. He certainly doesn’t make light of ours!

Why, other than that, Bennett is so aggressively engaged in the GMO debate is far from clear but it is certainly an area that AEI has taken a direct interest in.

Another AEI Fellow is Jon Entine, who has been described as “a longtime public relations operative with deep ties to the chemical industry.”

Entine arranged an AEI conference that led onto a book called “Let Them Eat Precaution”, with contributions by such well known pro-GMO activists as Patrick Moore, CS Prakash, and Entine himself. Another contributor was the co-founder of the AgBioWorld campaign, Greg Conko of the Competitive Enterprise Institute (CEI). Like AEI, CEI has been historically active on both the GMO front and climate change denial.

Another contributor to AEI’s book and conference was Monsanto’s former director of corporate communications Jay Byrne. Entine is known to work in close coordination with Monsanto’s PR people and has done industry-backed work with Kevin Folta. Entine’s Genetic

Project has also been to the fore in promoting Kevin Folta and defending him from his critics. This has included publishing an attack on GMWatch by Stephan Neidenbach, who prides himself on leading Folta’s attack posse via his group, We Love GMOs and Vaccines.

Through the looking glass

Bennett, Entine and Neidenbach all make use of a tactic beloved of corporate PR warriors – inverting the power relationship between industry and its critics so that the environmental movement appears to be the lavishly funded bully boy targeting its hapless victims.

Bennett performs this kind of inversion to perfection:

* Folta got money from Monsanto but we are attacked as industry propagandists
* Folta told the world he got zilch from Monsanto, and had no connections with them, but we are the ones accused of “falsehoods” and “fabrications”
* Folta put his name to pieces ghostwritten for him by the industry’s PR firm but we are transformed from a grassroots group into “a PR agency”
* Folta promotes misinformation in defending Monsanto products but we are the ones supposedly damaging the standing of science.

Performing such transformations, while expressing faux outrage, seems to be a key part of the skill set of the industry-friendly troll.

Folta thanks Bennett for his support

When Bennett’s Twitter tirade against us was over, Folta tweeted his thanks for Bennett’s support, while suggesting he block us for the future. In a later tweet Folta told Bennett, “I appreciate your support on everything.”

In doing so, Folta made no attempt to distance himself from the extremity of Bennett’s accusations, including the defamatory attacks he had made against a series of scientists.

Perhaps this is not surprising when one considers Folta’s own track record. He has repeatedly labelled scientists he disagrees with charlatans, whackjobs and even morons. He has also accused a well known scientist of faking his results, without producing any evidence to back up his attack.

But although Folta, like Bennett, vilifies these scientists without in any way justifying the abuse, he is the first to accuse others of failing “to fact-check” in an “effort to harm” his reputation.

The gap between Kevin Folta and an industry-linked troll seems to be almost no gap at all.